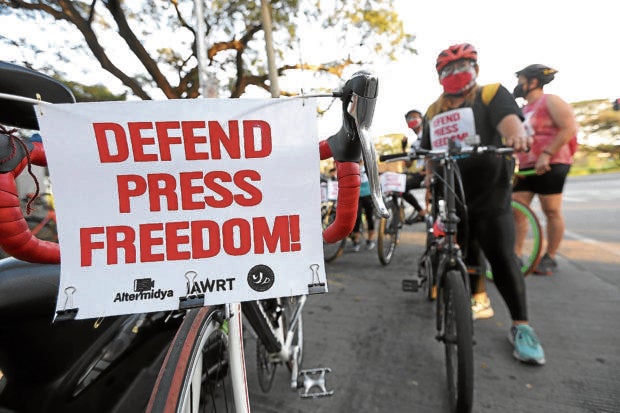 SUPPORTING TRUTH-TELLERS In February, media workers and human rights advocates staged a biking event in Quezon City to call attention to the plight of journalists in the country. Their message is still relevant as the world marks World Press Freedom Day on May 3, when journalists, including those in community papers and the campus press, continue to face threats and risks as they perform their task as truth-tellers. —NIÑO JESUS ORBETA

MANILA, Philippines — Amid the COVID-19 pandemic and the increasingly authoritarian policies that subvert democratic norms in the Philippines, journalists must remain critical and hold power to account, civic and media groups said on Monday.

To commemorate World Press Freedom Day, the Commission on Human Rights, National Union of Journalists of the Philippines (NUJP), Center for Media Freedom and Responsibility (CMFR) and other civic organizations drew attention to the invaluable role of the media in providing information for the public good, and the double hazards they face under a public health crisis and an increasingly hostile administration.

“Even as we mark World Press Freedom Day with many reasons to be fearful, we mark it also with hope, knowing that there are many of us still working each day to gather facts and shine a little light on what is happening in the country and on what isn’t,” the NUJP said.

“Generations of journalists in the Philippines and in the world have faced threats and risks in relation to their work, and the best response to these is nothing new either: [For] us to work together to ensure that each of us [is] safe to be the independent monitors we are supposed to be,” it added.

In his message to mark the occasion, President Duterte affirmed the country’s commitment to protect press freedom as a public good and as “an indispensable requirement [for a] vibrant democracy.”

“Let me assure everyone that this administration will remain committed in promoting press freedom as a vital component and indicator of progress anywhere in the world,” he said.

At the same time, he had an appeal to media: “Cognizant of the ever-changing communication system these days, may the mass media also uphold fairness and transparency while also making a positive impact on the people’s lives.”

Despite his reassuring words, the country, according to the Committee to Protect Journalists, remains one of the deadliest places worldwide for journalists who continue to be threatened, arrested or even killed by state agents or their supporters.

Even campus journalists have not been spared. On the eve of World Press Freedom Day, authorities raided the house in Albay province of Justine Mesias, senior editor of Cassipi, to look for firearms. Cassipi is the official student publication of Bicol University’s College of Social Sciences and Philosophy.

The incident only highlighted the Duterte administration’s efforts to silence dissent among the youth, according to the College Editors Guild of the Philippines.

“We enjoin all campus publications and the members of the press to stand with the victims of these outrageous incidents and side with the truth. At a time when our freedom and liberties are at stake, all the more that the people need critical and fearless journalism,” it said.

For CMFR executive director Melinda de Jesus, the Philippines’ slow decline into authoritarian rule has had the “most dramatic” impact on the press.

Even now, the closure of broadcasting giant ABS-CBN and the cyberlibel conviction of Rappler CEO Maria Ressa continue to have a “chilling effect” on media, whose adversarial role has been noticeably subdued since then, she noted.

In the past four years alone, CMFR has recorded at least 223 attacks and threats to journalists nationwide. Of these, 19 were killed, while others faced various forms of harassment, including intimidation, libel threat, physical assault, arrest or being barred from coverage.

Nearly half of all these attacks can be traced directly to state agents, the local media monitor said. These included national (34) and local government officials (38), police (34) and military (8).

These figures, said De Jesus, showed how Mr. Duterte’s hostility toward the press had also been adopted by officials on the ground.

“These numbers reflect a notable increase (in attacks) that imitates the position government has taken,” she said. “We have received more (reports). This may be out of the greater sense of danger for media.”

On the other hand, of the 51 recorded cases of intimidation from 2016 to 2021, around 30 were incidents of Red-tagging, the CMFR added.

For this reason, several groups, including journalist organizations, have continued to call for the junking of the antiterror law.

—WITH REPORTS FROM JEROME ANING AND MEG ADONIS

Read Next
Nightlife back as Spanish city pilots digital COVID pass
EDITORS' PICK
Manila is 78th most expensive city in the world for foreign workers
TeaM Energy pushes development programs to help in pandemic rebound
Want to help local farmers? Shop small and eat Real Food
Piolo Pascual: The Ultimate Heartthrob continues to level up
ICC is everything but a court of ‘white people’
Garcia softens stance, meets IATF halfway on swab-upon-arrival policy
MOST READ
Sharon Cuneta on living in the US: ‘Nagagawa ko lahat ng normal na bagay’
ICC is everything but a court of ‘white people’
After flying PAF jet, AFP chief vows more modern aircraft for PH defense
Duterte-Duterte tandem possible but ‘winnability is another question’ — Binay
Don't miss out on the latest news and information.