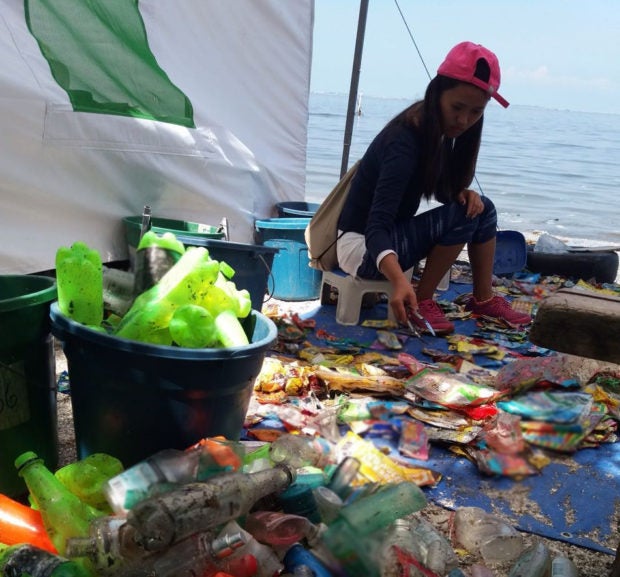 Recyclables, such as pet bottles, were among the trash recovered during the cleanup in Freedom Island. If segregation and recycling were done at source, these materials would not have found their way into the bay. (FILE) Photo by GAIA

MANILA, Philippines — The Philippines was one of Asia’s largest contributors to marine plastic pollution, according to data recently released in the scientific online publication website Our World in Data (OWID).

The data published on Saturday, which cited a recent study published in a peer-reviewed academic journal, detailed that at least 81 percent of the 4.8 to 12.7 million tons of global plastic waste in the oceans came from Asian rivers.

“The fact that a disproportionate amount of plastic pollution comes from Asia is consistent with previous research. Earlier studies estimated its share in 2010 was 86%.8 This should also not surprise us given the fact that Asia is the world’s most populous region (home to 60% of the world population),” said Hannah Ritchie, senior researcher and head of research at OWID.

This brings the country’s total marine plastic input to at least one-third or 36 percent of the total ocean plastics emitted from Asia.

“This is because the Philippines consists of many small islands where the majority of the population lives near the coast. But it’s an important update on our previous understanding of where China and India were thought to dominate. India accounts for 13%, and China for 7%,” Ritchie explained.

Pasig River and the PRRC

Pasig River, a 27-kilometer long waterway that cuts across Metro Manila, accounted for 6.4 percent of global river plastics in Asia.

Based on the interactive map produced by non-profit organization Ocean Cleanup Project, the Pasig River dumps over 69,000 tons of plastics into the ocean every year

In past years, the government has previously made an effort to rehabilitate the river by clearing piles of plastic wastes. This was made possible through the creation of the Pasig River Rehabilitation Commission (PRRC).

The commission had a successful run in 2018 and was given the first Asia River Prize Award by the International River Foundation.

However, in September last year, President Rodrigo Duterte deemed that the river “uncleanable.” A couple of months later, he has ordered the disestablishment of PRRC.

The commission’s powers and functions, as mandated in Executive Order No. 93, was then transferred to other government agencies and offices such as the Manila Bay Task Force, the Department of Environment and Natural Resources (DENR), the Department of Human Settlements and Urban Development (DHSUD), and the Metropolitan Manila Development Authority (MMDA).

The OWID report said the country’s distribution of ocean plastics was determined through three steps–the first step focused on the amount of plastic waste generated by each country while the remaining steps examined the mismanaged plastic waste per country.

“Plastic will only enter rivers and the ocean if it’s poorly managed. In rich countries, nearly all of its plastic waste is incinerated, recycled, or sent to well-managed landfills. It’s not left open to the surrounding environment,” Ritchie wrote in her report.

Data bared that the 2019 per capita mismanaged waste in the Philippines, around 6.52 percent, was a hundred times greater than in the United Kingdom.

The World Bank, in its “Market Study for the Philippines: Plastics Circularity Opportunities and Barriers” report released in March stated that at least 2.7 million tons of plastics are being thrown away by Filipinos every year.

Meanwhile, data published in the journal Science Advances found that over 550 million kilograms of plastic waste are being mismanaged in the Pasig River alone.

The OWID report, likewise, said that the probability of mismanaged waste from the Philippines ending up in the ocean in 2019 equated to 7.17 percent.

To address the issue on the plastic waste management in the country, the World Bank recommended the following:

The DENR has vowed to eliminate the use of plastic straws and plastic coffee stirrers in the country, saying “this is long overdue and we need to catch up with the demand of solid waste management in our country.”

“The prohibition on these two single-use plastic items may be small steps in the NEAP listing, but it is a big leap when it comes to compliance with the provisions of RA 9003,” DENR Undersecretary Benny Antiporda said.