Taliban, Afghan forces clash as US hands over base 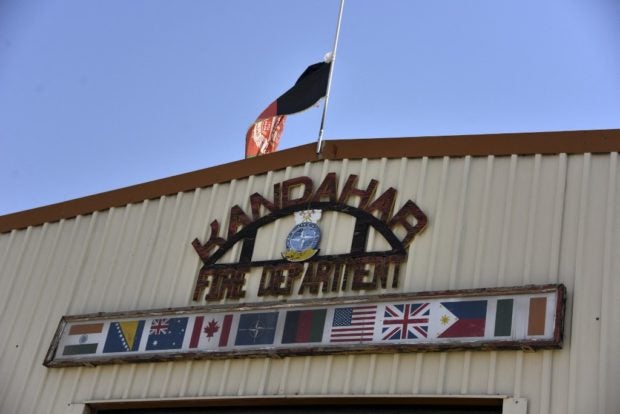 In this photograph taken on April 29, 2021 an Afghan national flag flutters on a mast at the Kandahar fire department in a US military base in Kandahar. Photo by JAVED TANVEER / AFP

KABUL — Fighting between Afghan government forces and the Taliban has left more than 100 insurgents dead in the past 24 hours, the defense ministry said Sunday as it took control of a US military base in a restive province.

The US military handed over Camp Antonik in the southern Helmand province to Afghan forces, a day after it formally began withdrawing its remaining troops from the country.

The Taliban and government forces clashed across several provinces, the ministry said, including in the former insurgent bastion of Kandahar where the US military carried out a “precision strike” on Saturday as it began the final troop pullout.

Another 52 Taliban fighters were wounded in the clashes, the ministry said, without giving details of any casualties suffered by government forces.

The Taliban did not offer any comment on the fighting, but both sides are known to exaggerate casualties inflicted on the other.

Fighting on the ground has continued unabated in recent months as peace efforts aimed at ending the 20-year conflict have faltered.

The US military formally began withdrawing its remaining 2,500 troops from the violence-wracked country on Saturday, as ordered by President Joe Biden last month.

Afghan officials said all foreign troops were being taken to Bagram, the biggest American base in Afghanistan, and from there they would leave to their respective countries.

As part of the ongoing drawdown, the US military handed over Camp Antonik in Helmand to Afghan forces, the defense ministry said.

It said the base will be used by Afghanistan’s special forces that have been trained in counter-terrorism operations by the US military and NATO.

Photographs of the hand over ceremony released by Afghanistan’s defense ministry showed US soldiers lowering the US flag at the base and a group of Afghan troops subsequently raising the national flag.

The US military has handed over several bases to Afghan forces since Washington signed a landmark deal with the Taliban last year that paved the way for the withdrawal of foreign forces.

The deal signed in February 2020 under the administration of ex-president Donald Trump stipulated that all foreign forces would be withdrawn by May 1, 2021.

Biden announced in April that the last remaining 2,500 American troops would instead be withdrawn by the 20th anniversary of the September 11 attacks and not by May 1.

But he said their withdrawal would start on May 1.

As the formal pull out commenced on Saturday, the US military said it carried out a “precision strike” after an airfield in Kandahar where it has a base “received ineffective indirect fire” that caused no damage.

The attack on the Kandahar base, which has not been claimed by any group, came as the Taliban warned that the US military had violated the 2020 accord by not finishing the troop withdrawal by May 1.

“This in principle opens the way for our mujahideen to take appropriate action against the invading forces,” Mohammad Naeem, a Taliban spokesman, told AFP adding that the group was awaiting orders from its leaders for its future course of action.

Since the US withdrawal deal was struck the Taliban have not directly engaged foreign troops, but have mercilessly attacked government forces in the countryside and waged a terror campaign in urban areas.