MANILA, Philippines — At the height of the pandemic last year, even hospitals in First World countries like the United States were running short of equipment, particularly ventilators that could aid in breathing and save the lives of COVID-19 patients in severe or critical condition.

The Philippines was no exception with the increasing number of coronavirus cases posing unprecedented challenges to its health-care system. In April 2020, the Department of Health sounded the alarm over a possible shortage of ventilators with only 1,263 units available in hospitals nationwide.

The problem was worse in smaller hospitals in the provinces, which could not afford to buy mechanical ventilators that cost between P500,000 and more than P1 million each.

Shortly after, the government — through the Department of Science and Technology (DOST) — called on the scientific community for help and offered funding for the development of a locally produced ventilator.

Unknown to DOST officials, a team from the Technological Institute of the Philippines (TIP), led by electronics engineer John Joel Martinez, had started work on a prototype months before.

A year in the making

“We knew it was only a matter of time before developing countries in Asia, including the Philippines, would have to deal with this problem,” Martinez told the Inquirer in a recent interview.

It took a year before the team developed “SiglaVent” (“sigla’’ meaning energy or vitality).

“When the pandemic struck, everything came to a standstill. We lost a lot—work, business, [loved ones]. Many lost the will to keep moving forward,” Martinez said. “We needed something to revitalize and inspire people, hence the name SiglaVent.”

The ventilator was the result of a partnership with private sector network Vents for Philippines and P1.078 million in funding from the DOST’s Philippine Council for Industry, Energy and Emerging Technology Research and Development.

During a presentation to President Duterte on April 20, Science Secretary Fortunato dela Peña said that SiglaVent was the first to pass a third-party medical device inspection—the last step in the project’s first phase.

Under the second phase, SiglaVent will be tested on hospital patients. Martinez’s team is also working on getting ethical clearance for conducting clinical trials at the Lung Center of the Philippines, one of the country’s COVID-19 referral hospitals, plus additional funding for testing from the DOST-Philippine Council for Health Research and Development. 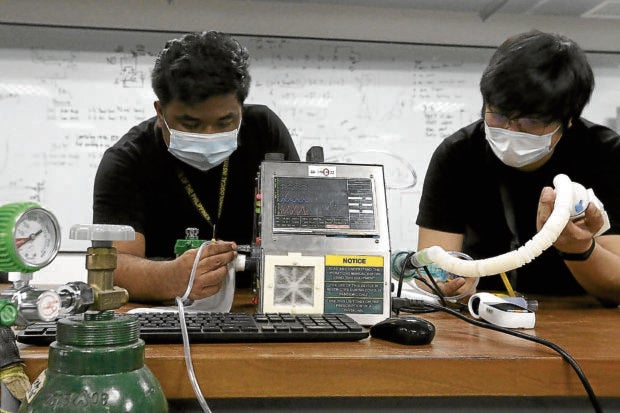 Understandably, the ventilator’s inventors have not released a lot of details about their product pending patent approval. “But in a nutshell, SiglaVent is a simplified version of the ICU ventilator devices that we import from other countries,” Martinez said.

Its design is based on the compression action of an “ambu bag” or bag valve mask pumped by hospital staffers to help patients breathe.

When doctors or nurses are too busy to perform this task, a family member of the patient is sometimes asked to take over. “[But] this process could be inaccurate and imprecise and could have detrimental effects on the patient,” Martinez warned.

According to him, SiglaVent is designed to “automate the ambu bag action by [creating] an electronic control system which enables it to provide accurate tidal volume (in milliliters), precise respiratory rate (breaths per minute) and correct IE (inspiratory-expiratory) ratio.”

The ventilator comes with a backup battery to continuously support the patient even during a power outage. The parts connected to a patient are also easy to detach, making disinfecting the equipment more convenient and ideal for COVID-19 patients.

Although no price has been set for SiglaVent once it comes out in the market, Martinez said that “it is definitely going to be cheaper than the ones we import.” Currently, all ventilators being used in the Philippines are bought from abroad.

Although the country already has locally developed ventilators, all are still undergoing testing in preparation for commercial release. These include “Ginhawa,” made by the University of the Philippines Manila and De La Salle University, and “Ostreavent II” of UP and DOST’s Metals Industry Research and Development Center, which was named after its inventor, Dr. Enrique Ostrea Jr. of the UP-Philippine General Hospital. Both have been redesigned for COVID-19 patients.

According to Martinez, they expect the commercialization of their prototype—the third and last phase—to happen in the early part of next year.

But at this point, the team is already in talks with several local companies who want to improve and manufacture their design after it got the approval of the Food and Drug Administration.

Two other teams that secured funding from the DOST for their ventilator prototypes were Don Bosco Technical College in Mandaluyong (P3.337 million for “Spiritus Vitae”) or Breath of Life, and Nueronmek Inc. (P2.724 million for its “NeuroVent System”).

“If many of us are working on this together, we can even export our locally made ventilators to other countries which are having a shortage of ventilators,” Martinez said. INQ