Guns, explosives recovered by the police in their houses were ‘planted,’ groups insist
By: Mar S. Arguelles - Correspondent / @msarguellesINQ
Philippine Daily Inquirer / 04:35 AM May 03, 2021 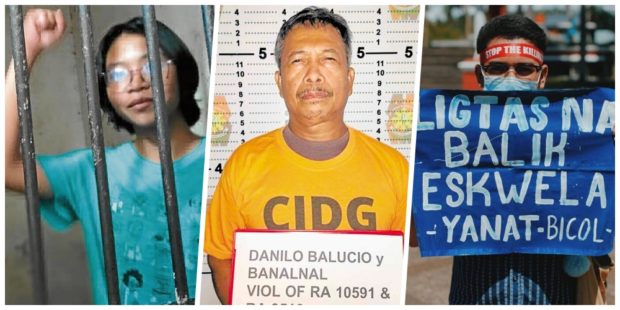 LEGAZPI CITY, Albay, Philippines — The youth group Anakbayan has raised an alert on the fate of two local activists who were arrested by policemen in separate operations in Albay and Camarines Sur provinces early on Sunday.

Arrested were Daniel Balucio, 61, a pastor of the National Council of Churches in the Philippines and secretary general of Bagong Alyansang Makabayan (Bayan) in the Bicol region; and Sasah Sta. Rosa, 21, spokesperson for Jovenes Anakbayan in the region.

Police also raided the home of Justine Mesias, a college student at Bicol University in this city and spokesperson for Youth Act Now Against Tyranny Bicol, on Sunday morning but he was not around when the police came.

But police said they found a gun and explosives in his house.

In social media posts on Sunday, Anakbayan said the arrests conducted by the Philippine National Police and the search on Mesias’ home were based on trumped-up charges and on “planted” guns and explosives allegedly found in their homes.

According to Anakbayan, Sta. Rosa’s relatives were forcibly sent outside their residence and ordered to drop face down while the police conducted a search for about 40 minutes.

After the search, a member of the raiding team came out holding a bag containing a gun, a hand grenade and a red flag, the group said.

Sta. Rosa was taken and detained at the PNP Criminal Investigation and Detection Group headquarters in Naga City.

In a separate operation, police served a search warrant, also issued by Armes, on Balucio at his house in Sto. Domingo town in Albay around 4 a.m., Casilihan said.

The search turned up explosives inside Balucio’s room, he said.

Around 40 policemen allegedly forcibly entered Mesias’ residence in Daraga town, Albay, and pointed their guns at his family as they conducted a search.

A .45-caliber gun and explosives were also found in Mesias’ house during the two-hour search.

Casilihan said the arrests were orchestrated and the evidence was planted to build cases against the activists.

In a statement on Sunday, Brig. Gen. Jonnel Estomo, Bicol police chief, maintained that the arrests of the activists were part of the police crackdown on loose firearms and explosives.

A police report said a 9mm pistol with live bullets, a hand grenade, an improvised explosive device, a switch, a time fuse, a red book with the title “Batayang Kurso ng Partido,” a black shirt with “Rebolusyon hindi eleksyon” printed on it, documents and a wallet were recovered from Sta. Rosa’s house.

Recovered from Balucio’s house were a .45-caliber gun with magazine and bullets, two magazines containing 16 bullets, and another with eight bullets for the M14 rifle, a hand grenade, a holster and a red flag with “Bagong Hukbong Bayan” markings.

PNP chief Debold Sinas, in a statement released from Camp Crame, insisted that Balucio and Sta. Rosa were suspected members of the local communist group. Both are facing charges of illegal possession of firearms and explosives before their respective local prosecutor’s offices, he said.

Jenelyn Nagrampa, Bayan Bicol chair, said the arrests were indeed a “crackdown on people that are against the government antiterror law” and were part of the “Red-tagging and ‘Kill, Kill, Kill’” campaigns against political activists.

Nagrampa said she had asked the National Union of Peoples’ Lawyers to assist the activists.