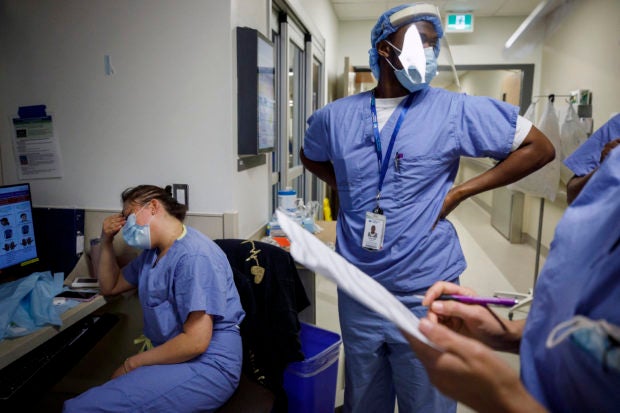 The 29-year-old caregiver at Toronto’s Humber River Hospital is looking after two patients in their 60s who are on ventilators.

“We’re overwhelmed,” Faquiry told AFP, conveying the feelings of her peers who often say they feel powerless against a tidal wave of new cases, and angry at times — especially with the Ontario government’s arguably slow response and with Ontarians who do not following public health orders to contain the coronavirus.

Ontario is now the epicenter of the outbreak in Canada, led by more virulent variants. The latest surge in the number of cases was so big that authorities this week despatched the military and the Red Cross to help care for critical patients.

“We’re short of nurses. We had some nurses that left, but also we have nurses that are getting sick, too,” she adds.

At the week’s end, there were more than 2,200 people hospitalized with Covid-19 in the province of 14 million. Nearly 900 patients were listed in critical condition.

Medical staff have been redeployed from other wards to the ICU to lend a hand, and transferring patients to facilities in less affected areas has alleviated some of the pressure on this Toronto hospital.

But more than a year after the World Health Organization declared a pandemic, “the team is tired,” comments Raman Rai, head of the intensive care unit where a few children’s drawings thanking caregivers hang on the walls, bringing a glimmer of cheer.

At times overcome by a deep sadness, Rai says: “You see people who have not only lost a loved one, but who have lost several members of their family. It is very hard.”

More than 60 percent of patients in Humber River Hospital’s intensive care unit on Wednesday were being treated for Covid-19. In one of the rooms, relatives and a priest gathered around a patient’s bed, praying.

Every day, several more patients must be placed on ventilators. On Wednesday, a 52-year-old man with low blood oxygen levels was intubated by a team of four caregivers fully dressed in protective gowns, gloves, masks and visors.

“He was so scared, he could barely breathe,” recounts Melody Baril, who performed the intubation.

“You try and give them a little bit of hope,” she says, “but the death rate is so high, once you get to this point.”

More than 8,000 people in Ontario have died from Covid-19, representing one-third of the nationwide pandemic death toll. The number of cases in the province has risen to over 450,000, or almost 40 percent of the total in Canada.

After peaking in mid-April, the number of new daily infections has fallen slightly over the past 10 days and a vaccine rollout is accelerating. But the number of patients in intensive care continues to rise.

Fearing the crisis will persist, some caregivers say they are angry with Ontario Premier Doug Ford’s government — which has faced a storm of criticisms over its pandemic response of late — but also against a segment of the population that has stubbornly resisted following public health restrictions.

“I feel frustrated,” says nurse Sarah Banani. “I think perhaps things could have been shut down harder and faster as we saw the variants take hold within the population.”

“I think we all feel we have been let down a little bit by society,” comments physician Jamie Spiegelman, adding that many health care providers “feel powerless to change things.”

“When I go outside and see traffic, people in a shopping center not taking the necessary precautions, that’s a letdown,” he says.