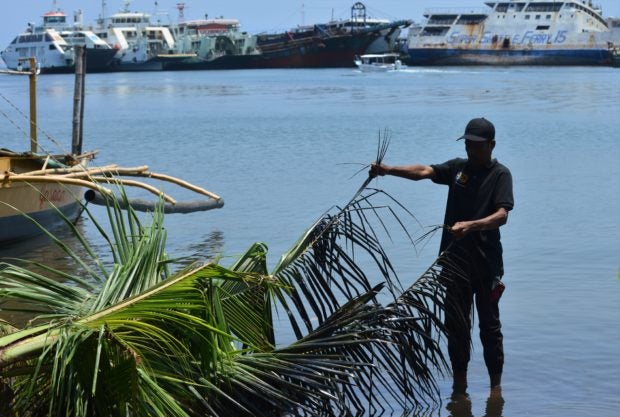 A man looks at the coconut palm frond that was contaminated by the oil discharged from a sunken ship in Barangay Lower Jasaan, Misamis Oriental, in this recently taken photo. Jigger J. Jerusalem

CAGAYAN DE ORO CITY — Officials of a village in Jasaan town, Misamis Oriental are planning to sue the owners of a sunken ship which caused an oil spill on their shores early last month

Sabas Tagarda Jr., village chief of Lower Jasaan, said the ship’s owners, identified as Sherwin Doctora and Dr. Lord Sanny Salvaña, have earlier told the Environmental Management Bureau (EMB) that they will undertake the cost of the oil spill’s cleanup.

However, only P40,000 was given for the effort, split among five affected villages.

Tagarda complained that the amount was way short of the actual cost incurred to rid their coasts of the pollutant.

Tagarda said the barangay council is planning on lodging a complaint at the EMB in the near future.

“We will file a complaint in a proper time. This has already happened three times in my administration, and I cannot let it happen anymore,” Tagarda explained.

The vessel was already inoperable and was ready for scrapping when it sank near a local shipyard in Barangay Lower Jasaan.

The discharge of oil from the cargo ship has affected the coastal villages of Lower Jasaan, Upper Jasaan, Luz Banson, Solana, and Kimaya.

Tagarda said that in two weeks, over 80 percent of the spillage in their village was already collected, facilitating the return to normalcy in the cleaned portions of the coast.

The oil spill that got into the mangroves are also being washed naturally by the waves.

The EMB has assured that the ship’s owners “will pay the expenses incurred in the cleanup operation along with the transport and treatment of the collected oil spill contaminated materials and debris.”

Moncayo added that prior to the sinking, a salvaging company has asked permission from the PCG to pump out remaining oil and other fluids inside the boat before scrapping it.

He said the PCG did not issue the permit as the salvaging company failed to comply with the requirement of installing oil spill booms around the vessel before the pump-out operation could start.

EMB has noted that the PCG and barangay volunteers have recovered 21 drums of oil and oil-contaminated materials composed of sawdust and sand, and another 21 sacks of oil-contaminated debris.