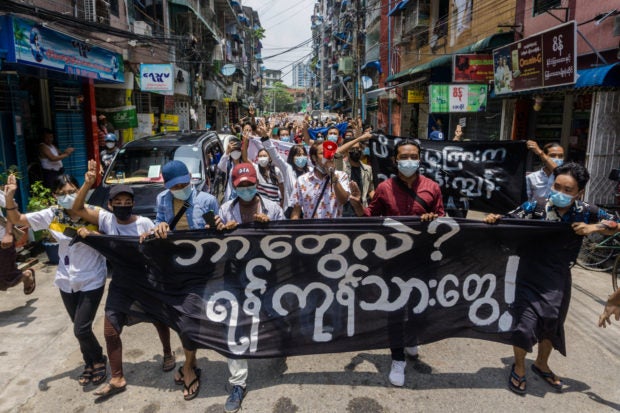 Protesters hold a banner that reads, “Who are we? We are Yangon resident” during a demonstration against the military coup in Yangon’s Sanchaung township on April 27, 2021. (Photo by STR / AFP)

YANGON, Myanmar  – Two Myanmar air force bases came under rocket attack on Thursday, the military said, as the country grapples with violence in the wake of the February 1 coup.

Myanmar has been in turmoil since the generals seized power, ousting civilian leader Aung San Suu Kyi and unleashing a wave of near-daily street protests calling for a return to democracy.

Security forces have sought to quell the unrest with a brutal crackdown on protests, with more than 750 civilians killed, according to a local monitoring group.

Fighting has also flared up between the military and Myanmar’s numerous ethnic rebel armies, some of which have backed the protest movement and sheltered activists on the run from the junta.

A military spokesman said air bases in the central cities of Magway and Meiktila came under rocket fire early on Thursday morning, but no damage was done.

It is not clear who was behind the attacks, but the military has launched air strikes in recent weeks against the Karen National Union (KNU), one of the leading ethnic rebel armies.

The KNU, which holds territory along the border with Thailand, on Tuesday attacked and razed an army post, prompting the military to respond with air strikes.

The surge in clashes between the military and ethnic rebels has prompted some observers, including the UN, to warn that the country’s crisis could spiral into a broader conflict.

Some 756 civilians have been killed and more than 4,500 arrested in the military’s crackdown on protests, according to the Assistance Association for Political Prisoners (AAPP), a local monitoring group.

The military authorities — which have labelled the AAPP an unlawful organisation — say 258 protesters have been killed, along with 17 policemen and seven soldiers.

Suu Kyi, held under house arrest since February 1 and apparently kept unaware of the chaos raging in the country, has been hit with a raft of charges that could see her barred from politics for life.

Protest leaders are also facing legal action. One of them, Wai Moe Naing, has been charged with murder and treason, according to state media.

A protester was also sentenced to death by a military court Thursday over the robbery of a military officer and murder of a civilian, state media said. Nineteen others have already been given death sentences in the case.