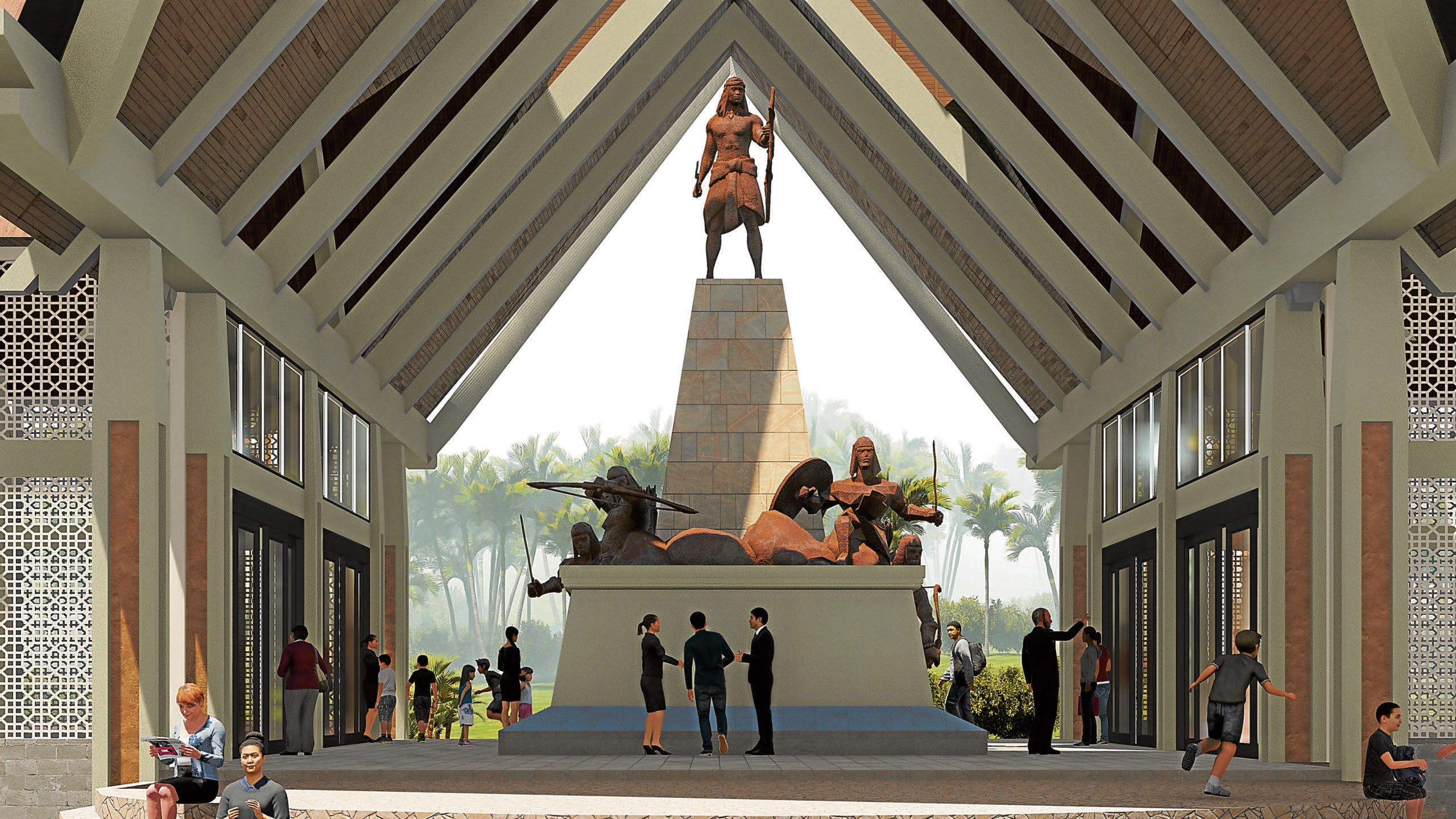 PROTECTOR OF THE PEOPLE  – This monument design executed by architect Rex Sicat Jr., called “The Watch of Mactan,” depicts chieftain Lapulapu and his warriors before they faced foreign invaders led by Ferdinand Magellan. —CONTRIBUTED PHOTO

TARLAC CITY—In a new monument that will depict the heroism of Filipinos against foreign invaders, Mactan chieftain Lapulapu will share the spotlight with his warriors who defeated the Spanish forces led by Portuguese explorer Ferdinand Magellan 500 years ago.

The memorial’s design, called “The Watch of Mactan,” will be the template for the Lapulapu National Monument to be enshrined at the proposed Lapulapu Memorial Shrine and Museum in Lapu-Lapu City in Cebu province.

Rex Sicat Jr., 26, an architect from Bamban town in Tarlac province, bested at least 50 others whose entries were considered for the monument’s design. The competition was part of the commemoration of the 500th anniversary of the Victory at Mactan organized by the National Quincentennial Committee (NQC).

On Tuesday, Sicat, a graduate of Tarlac State University, was recognized during a ceremony at Liberty Shrine in Lapu-Lapu City. He received a certificate of recognition and other commemorative items from the NQC and the National Historical Commission of the Philippines. He will also receive a P300,000 prize.

According to Sicat, his masterpiece depicts a scene before the Battle of Mactan, where Lapulapu stands on a pedestal as he and his warriors prepare for Magellan’s arrival. He said the trapezoid pedestal symbolized the territory that Lapulapu protected. The white podium at the base of the monument represents the shores of Mactan, a reminder of where Magellan died and of the site of victory for Lapulapu’s people, Sicat said.

“In my design, Lapulapu is projected as calm, unlike other heroes who were usually portrayed in [their] fighting form. Lapulapu is just standing there while surveying the area and waiting for Magellan’s arrival. He trusts his warriors,” Sicat told the Inquirer in a telephone interview.

Sicat also included in his design three “Mangatang,” or local warriors, positioned as if preparing for an attack. They represent the divisions of Lapulapu’s 1,500 fighters.

At the back of the monument are a mother and child placed inside a “balay” (house), representing the local people.

“The mother is kissing her child as if assuring their safety and expressing that they are under Lapulapu’s protection. The goat and carabao signify abundant resources,” Sicat said.

He said the monument’s ladder or zigzag pattern outlining the balay represented Lapulapu’s feat. At the pinnacle is a hornbill or “kalaw,” which is recognized as a spiritual symbol, the guide to the afterlife.

The monument could fit in a 36-square-meter floor area, with a maximum height of 10 meters, or three stories high.

“It (the monument) would be a Tarlaqueño’s contribution to a celebration that is only once in 500 years. And as a national monument, it will be among the important monuments of our country, such as the Rizal Monument at the Luneta, the Quezon Memorial Monument in Quezon City and the Bonifacio Monument in Caloocan,“ said Xiao Chua, a Tarlac-born historian, in a separate interview.

Sicat said like the Battle of Mactan, his design was a collective effort, citing the contributions of fine arts graduates Ace Navarro, Lymuel Bautista, Jayme Lucas and Kadi Santos.

“It is already a recognition to be part of this national competition … This is an honor and legacy not only for me and my family but also for our province,” Sicat said.