The FDA  has never approved Ivermectin for human use. While it has granted a compassionate special permit for its use for COVID-19, it was only given to a handful of hospitals. Even the Department of Health said Ivermectin should only be for hospital use only.

“Under FDA existing law, the importation, sale, distribution or administration of unregistered drugs or vaccines are prohibited and accordingly punished. Ivermectin is not registered for use by humans because apparently, it is for the parasitic disease of animals,” Guevarra explained in an interview over ANC Headstart.

“In the case of Ivermectin, it is not registered particularly as a drug against COVID-19 and going by the FDA Law on its face. It would appear that the distribution of Ivermectin as a possible treatment for COVID-19 apparently violates the FDA law,” he added.

On Thursday, Deputy Speaker Rodante Marcoleta and Anakalusugan Rep. Mike Defensor proceeded with the distribution of Ivermectin in Quezon City. 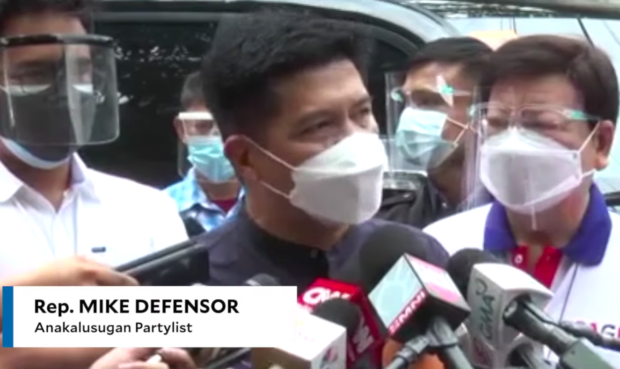 In allowing Ivermectin use for humans, the FDA has provided exemptions:

1. When it is covered by a compassionate use authorization issued to specific hospitals, doctors, or other entities; and

2. When Ivermectin is compounded by duly licensed pharmacies, and it’s usually supported by a doctor’s prescription.

Guevarra said if Defensor and Marcoleta’s act would fall under the exemptions “it would appear that they can put this up as a defense just in case a complaint is filed against them.”

‘I will fight them in court’: Defensor says if FDA stops ivermectin distribution

Read Next
P7M in cigarettes smuggled from Indonesia seized in Zambo
EDITORS' PICK
Kai Sotto continues to inspire Filipinos by sharing his passions and stories with Smart Prepaid
1Sambayan to nominees: Stick to word of honor
EDITORIAL: Good news, bad news
Alex Eala wins Grand Slam on Independence Day: ‘I hope I made my contribution to the country’
Trust Robredo’s political instincts – Kaya Natin! convener
Ahead of ONE: Full Blast II, Mongkolpetch warns Elias Mahmoudi: ‘Watch out for my fists’
MOST READ
Duterte, Mayor Sara unlikely to run under same slate in 2022, says Lacson
China cautions G7: ‘small’ groups don’t rule the world
1Sambayan to nominees: Stick to word of honor
Leni vs. Sara
Don't miss out on the latest news and information.