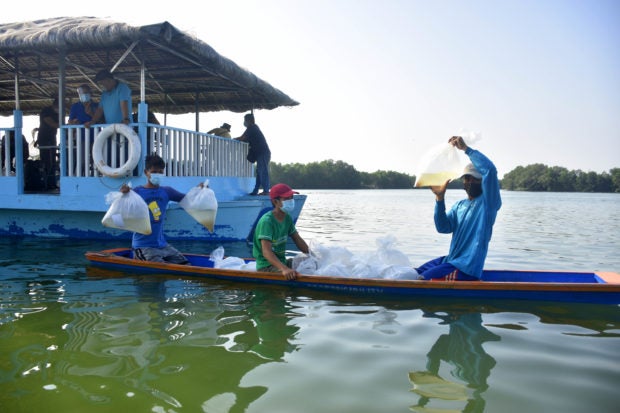 Bags of bangus fingerlings are ready for distribution to fishermen in Dagupan City. Some of these were released into Dawel River. Photo by Willie Lomibao

Mayor Brian Lim said the activity was a “simple gesture” of celebrating the annual Bangus Festival, which was canceled again because of the pandemic.

The Bureau of Fisheries and Aquatic Resources donated the fry and the fingerlings, Lim told the Inquirer.

“As of now, let us be vigilant, safe, and follow health protocols,” he said.

Lim also announced that the city government was planning to open the river cruise, a tourist attraction of the city, on a limited capacity.

He said the boats are not enclosed and the rive offers fresh air that would be good for the mental health of the people.

Visitors could also enjoy the cruise while helping the local economy bounce back.