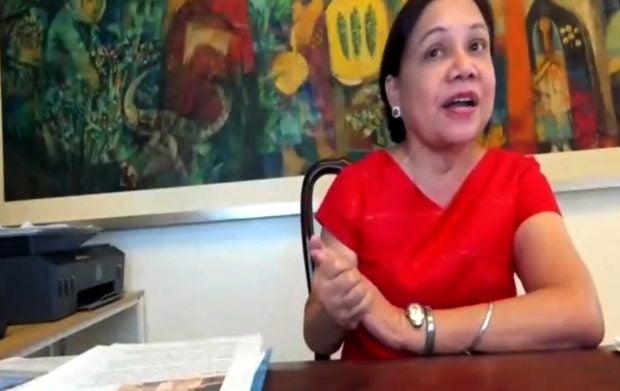 Sen. Cynthia Villar presses for a compromise on the government’s importation policy for pork, which many lawmakers questioned.  (Screen grab/ Senate PRIB)

MANILA, Philippines—To avoid potential conflict between the legislative and the executive branches, Senator  Cynthia  Villar on Tuesday sought a compromise on the government’s pork importation policy being questioned by many lawmakers.

In the Senate alone, many members oppose the lowering of tariff rates on imported pork products as well as the government’s plan to raise the minimum access volume (MAV) from 54,000 metric tons (MT) to 400,000 (MT).

These have also been hotly debated during the hearings of the Senate Committee of the Whole.

At the third hearing of the committee on Tuesday, however, Villar urged  Finance Secretary Carlos Dominguez III to just meet halfway to prevent any animosity between the two branches of government.

(So I hope, my request to Secretary  Dominguez is let’s compromise because if we don’t compromise then we would have a big problem and we’ll all be at the losing end—the consumers, hog farmers. We’ll fight each other— the  legislative and the executive—if we don’t agree.)

(So I’m requesting that let’s compromise here. Lower the MAV and don’t further reduce the  tariff)

Instead of spending hours of hearing time debating the issue, Villar said a “proper compromise” would make everyone happy.

(That’s all I’m asking, for Secretary Dominguez to intercede here, let’s compromise  so we’d be happy together because we still have a lot to do together)

Villar said they could move on to other pressing problems if they could come to an agreement on pork importation.

(Let’s compromise here, let’s not fight each other. We meet halfway.)

“Our minds are not closed. We want to achieve together your goal of making sure that there’s a reasonable and affordable price for pork and other food stock for our consumers that our inflation rate is not damaging to our economy in the long run and definitely that theres’ support to the pork producing industry,” the finance chief said.

Dar said he would follow through on Dominguez’s promise about keeping his mind open, adding that as part of the economic development cluster team, whichever decision was made on importing pork would be followed.