Activists ask why can’t millionaires do it if ordinary citizens can
By: Gabriel Pabico Lalu - Reporter / @GabrielLaluINQ
INQUIRER.net / 08:04 PM April 27, 2021 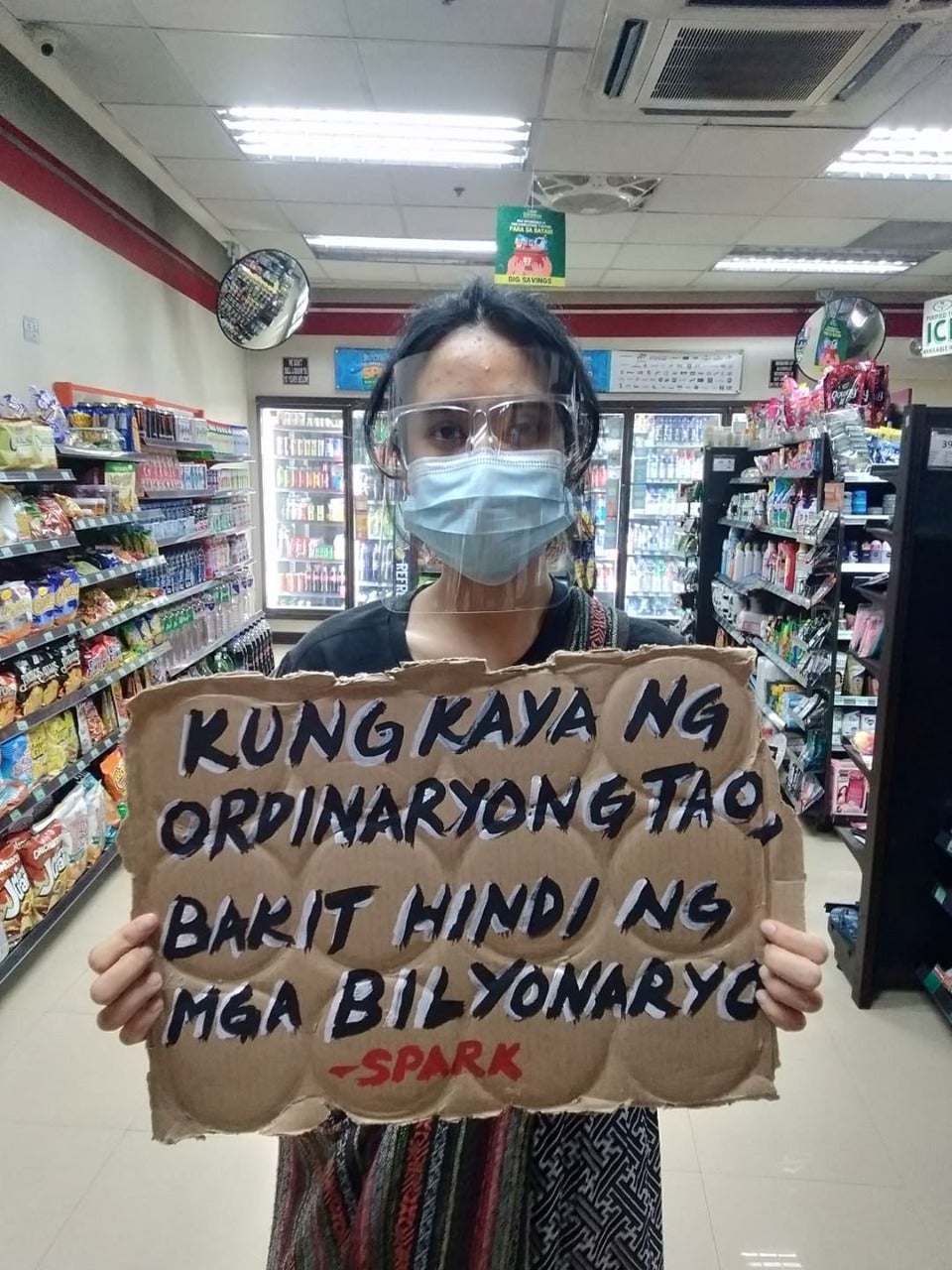 MANILA, Philippines — Grocery store owners have been dared by a youth group to set up their own versions of the community pantry to feed people whose jobs and livelihood were affected by the strict lockdowns placed amid a COVID-19 surge.

As a form of a visual protest, members of the Samahan ng Progresibong Kabataan (Spark) trooped to several grocery chains and took photos of themselves while raising placards questioning why rich and millionaire mall owners cannot emulate what ordinary citizens have done.

Several of the photos showed placards with the words “Kung kaya ng ordinaryong tao bakit hindi ng mga bilyonaryo” which literally translates to “If ordinary people can do it, why can’t billionaires?”

“It is only logical to ask, if it’s possible for ordinary people to reach out, then why can’t billionaires do it as well? With all the riches they have accumulated throughout their decades of operations and unfair labor practices, opening their stores and bodegas is the least they can do,” Spark spokesperson John Lazaro said on Tuesday.

“Even at a time of pandemic they still earn more than enough money to keep them afloat, while the others barely earn a living compared to what they work for,” he added.

According to Lazaro, the income that the community pantry donors have cannot be compared to the vast amount of assets that mall and grocery owners have, even during the economic downturn caused by the COVID-19 pandemic.

“The incomes of ordinary people are nothing compared to these billionaires and yet they are the ones who are willing to share what little amount they have,” he explained.

“The wealth that they have is much more than what they need. They have no reason to not help the poor and the needy,” he added.

The community pantry has been a hot topic as of late, as organizers set up makeshift stands where people who were left with little to no income during the lockdowns can get their food for the day.

While it was seen as a good initiative, questions were raised about whether there is a need to regulate the pantries given that it may be dangerous for public health especially as some disregard protocols like physical distancing and wearing of face masks — which may lead to COVID-19 transmissions.

After the community pantry version of actress Angel Locsin was crowded with people wanting to get in kind donations, several government agencies raised the possibility of regulating pantries and having organizers inform local governments of their activities.

But aside from that, several government officials especially those from the National Task Force to End Local Communist Armed Conflict (NTF-ELCAC) have claimed that the pantries are being used for the communist propaganda.

Both Communications Operations Office (PCOO) Undersecretary Lorraine Badoy and Southern Luzon Command chief Lt. Gen. Antonio Parlade Jr. have drawn flak for linking organizers of the community pantry to the communist armed movement.  This eventually led to them being asked to refrain from commenting on the issue.

The community pantry sprouted after Metro Manila and nearby provinces of Bulacan, Cavite, Laguna, and Rizal were placed under an enhanced community quarantine (ECQ) and later a modified ECQ (MECQ) due to rising COVID-19 cases.

The strict lockdowns meant a huge slump in some sectors’ incomes, while some sectors believe that the government’s P1,000 aid per qualified family member is not enough to sustain needs for even just a week.

Read Next
Olongapo gets COVID-19 breather: 17 recoveries, no deaths on April 26
EDITORS' PICK
Holidays made best with Acer’s ‘Holidays at Home’ raffle promo
BIR audits tax compliance of Pharmally
Two more sites at Robinsons Malls for temporary offsite passport services
Pharmally’s Twinkle Dargani in tears when asked about missing documents
Corruption in PH: Where presidential aspirants stand
Smart offers wireless fiber-like speeds to Filipino homes with country’s first 5G Prepaid Home WiFi
MOST READ
Roque ‘hurt’ after presidential aspirant did not adopt him in Senate lineup
Pharmally’s Twinkle Dargani in tears when asked about missing documents
3 travelers from S. Africa, Burkina Faso, Egypt test positive for COVID-19
Gordon to Duterte: ‘How dare you ask for Filipinos’ vote when you failed them?’
Don't miss out on the latest news and information.