Finance chief defends higher pork imports: Nobody is forced to bring in 400,000MT

MANILA,  Philippines—  No one is forcing people to bring in 400,000 metric tons (MT) of imported pork products.

Finance Secretary Carlos Dominguez III repeated this on Tuesday when senators quizzed government officials about the proposal to increase the minimum access volume of pork imports from 54,000 MT to 400, 000 MT.

At the hearing of the Senate Committee of the Whole, Dominguez underscored the need to raise pork imports to address the shortage of local hog production brought about by the Asian Swine Fever outbreak.

When Senate  President  Vicente “Tito”  Sotto  III   aired the stakeholders’ concern that the proposed  MAV increase was too high, Dominguez said: “Nobody is forcing people to import 400,000 MT.  That’s  just the  gate.”

“Now, if there’s no demand as they claim, the pork will not come in. Believe me.  If I were a pork importer, why should I bring in pork if I can’t sell it?  That’s just the gate.” 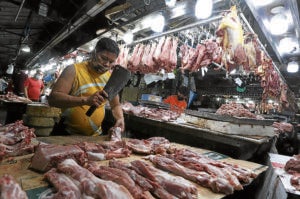 “Nobody is forcing anybody to bring in 400,000 MT. If the domestic production is higher, nobody will bring in pork with that tariff rate. That’s all I’m saying. Trust the market; the market will determine the price,” he stressed.

Sotto quipped, “That’s looking at it at a perfect world, Secretary  Dominguez. There  will be those who will abuse it, I assure you.”

“Abuse it how? I cant understand. How will it be abused?” the finance chief asked.

Like Sotto,  Senator   Cynthia  Villar reminded  Dominguez  that  the Philippines is “not a perfect market.”

(Just because your policies  are right, that’s what’s going to happen.)

“You know there’s always that cartel in the Philippine marketplace na kahit mababa presyo nila, magkakakilala sila (that even if their price is low, they know each other), they will control the price…” she said.

Later in the hearing, Senator Grace Poe observed that “there’s much trust” already lost between the DA and the local hog raisers.

“That really needs to be rebuilt. This is a fundamental factor that will enable the success of any future endeavor,” Poe said.

Read Next
‘Wrong move’: Dela Rosa rejects defunding NTF-ELCAC
EDITORS' PICK
Want to help local farmers? Shop small and eat Real Food
Manila is 78th most expensive city in the world for foreign workers
ICC is everything but a court of ‘white people’
Garcia softens stance, meets IATF halfway on swab-upon-arrival policy
Piolo Pascual: The Ultimate Heartthrob continues to level up
TeaM Energy pushes development programs to help in pandemic rebound
MOST READ
Sharon Cuneta on living in the US: ‘Nagagawa ko lahat ng normal na bagay’
ICC is everything but a court of ‘white people’
Duterte-Duterte tandem possible but ‘winnability is another question’ — Binay
More than 150,000 voters wiped off the registration list – Comelec
Don't miss out on the latest news and information.