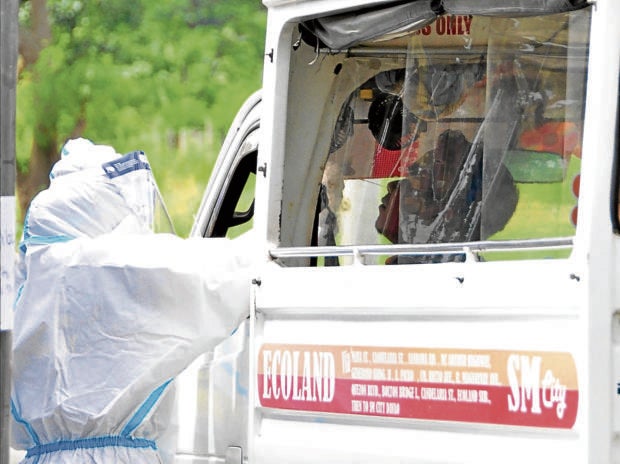 DRIVE-THROUGH A public utility jeepney driver gets a swab test at a drive-through testing center set up inside Crocodile Park in Davao City on Monday. —BING GONZALES

DAVAO CITY—As early as 5 a.m. on Monday, public utility jeeps and tricycle drivers here have begun lining up at Crocodile Park to avail themselves of the reverse transcription-polymerase chain reaction (RT-PCR) tests offered to them for free at the park’s drive-through.

The free RT-PCR tests will be conducted in the next 12 days, as part of the city government’s aggressive drive to curb the spread of COVID-19, even as the number of coronavirus cases here has been dropping.

On Sunday, the Department of Health (DOH) in the Davao region reported only 21 COVID-19 cases in Davao City, way below the 28 cases in Davao del Norte, which has dislodged Davao City as the place with the highest number of cases in the region.

Mayor Sara Duterte signed Executive Order No. 22 on April 22 that ordered the testing of drivers and the tracking of who could be the virus carriers among them.

The testing sites were intentionally made to be drive-through so that drivers could easily get swabbed before they resumed their trips and minimized disruption to their daily work.

Duterte also encouraged drivers of habal-habal (motorcycles for hire) and delivery services to undergo the tests.

So that drivers will not incur losses while being subjected to tests, they will be allowed to continue with their work after getting tested. It’s only when they are found positive for COVID-19 that they will be treated and that their direct contacts identified, Duterte assured.

She said the city government had prepared a list of other sectors that would be tested.

Among them are the Muslim communities who would be gathering for prayers during and after the holy month of Ramadan, the month of fasting for Muslims that began on April 12.

Aside from gathering for the Jum’ah prayer and the nightly Taraweeh prayer during the fasting month, Muslims also usually congregate to break the fast jointly after sunset. A big gathering also awaits when Muslims celebrate the end of the fasting month.

The mayor said the RT-PCR tests for Muslim communities might take place within two to three weeks after the start of the fasting month.

As a come-on, the city government has been giving away snacks and relief goods to those who opt to undergo the tests.

Early this month, the city government started the testing among vendors and other workers in public markets.

‘She’s the strongest:’ Drilon hoping Robredo will run for president