Catholic priests in the Philippines turn TikTok into virtual pulpit 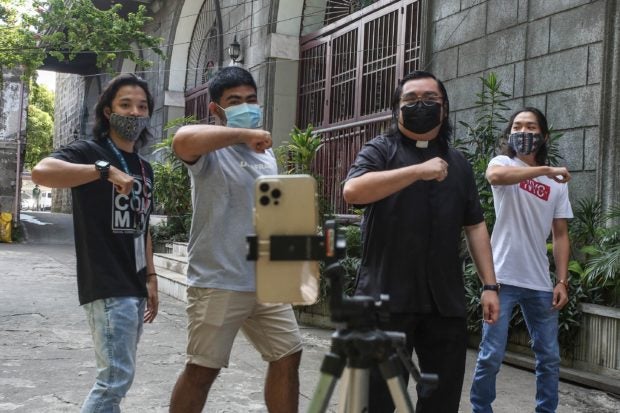 As the coronavirus pandemic forced places of worship to close across the Catholic-majority country, tech-savvy priests like Fiel Pareja turned the popular video-sharing platform TikTok into a virtual pulpit to connect with young believers.

Pareja spends up to six hours a night in his room in a presbytery north of Manila recording short videos for TikTok, snatching a few hours sleep before starting his real-world pastoral work.

The challenge is to create content that is relatable, creative and “not boring,” said the 30-year-old, who was ordained just weeks before the COVID-19 outbreak sent the country into a months-long lockdown.

Wearing a black cassock and clerical collar, Pareja recites Bible verses and offers prayers in English and Tagalog on everything from fighting anxiety to the restoration of democracy in Myanmar.

In other videos, he dances and lip-syncs to a Christian version of Zedd and Alessia Cara’s song “Stay.”

Pareja’s unorthodox evangelizing has resonated on the platform, a favorite of Generation Z. His more than 670 videos have each been liked tens of thousands of times and earned him the nickname “Father TikTok.”

“I believe social media can help us reach out to the youths of today,” said Pareja, who counts Muslims, Protestants and Methodists among his online followers. “It’s a never ending preparation and content creation. But this makes me happy and fulfilled knowing that people get their spiritual needs (met).”

His ever-growing fan base includes Erica Jacaba, a 20-year-old lapsed Catholic in the central province of Bohol.

Jacaba said she draws comfort from Pareja’s prayers, which she watches when she has enough money to pay for extra mobile phone data.

“Father Fiel’s prayers erase my sadness, the stresses I feel with myself,” Jacaba said. “I have peace of mind.”

As Asia’s bastion of Catholicism marks 500 years since the arrival of Christianity in the archipelago, the church remains a strong influence in the lives of many Filipinos.

Around 80% of the population describes themselves as Catholic and many practice their faith fervently.

But Luciano Felloni, a popular Catholic influencer and parish priest in Manila, fears interest among young people is waning. He said TikTok and other social media platforms have become important tools to keep the religious institution relevant.

“I think it is essential. The church should be fully present in the cybermission,” said the 47-year-old Argentinian who has lived in the Philippines for more than 20 years.

Felloni records and uploads TikTok videos for his more than 11,000 followers with advice on how to have a positive outlook, often straight after finishing his morning jog while still wearing sweaty sports clothes.

“My learning on social media is authenticity keeps people following you,” Felloni said. “I try to do it as I am and where I am. Spontaneity is very important.”

Felloni started posting videos on Facebook in 2016 before migrating to TikTok during last year’s lockdown after he realized it was the preferred platform for many youngsters.

“You cannot find them anymore in Facebook. They left already because Facebook has been taken over by the grandmothers and their mothers,” he said.

Felloni now leads efforts in his diocese to encourage other priests to use social media. He runs workshops about the different platforms and how to attract followers.

“People are really looking for God,” he said. “That’s what I realized on social media.”

COVID-19 upended the way most Filipinos practice their faith, with many unable to enter their church, take Holy Communion or participate in religious processions for more than a year.

Livestreaming masses on Facebook or YouTube and posting religious messages on Instagram have become the norm and are “here to stay” after the pandemic is over, said Broderick Pabillo, an auxiliary bishop for the Manila archdiocese.

“We’ve already had a taste of its use and we have seen its capability,” he said.

TikTok is playing a central role in Father Paul Woo’s efforts to coax the young into church pews in Navotas City, one of the poorest areas of the capital.

“Sometimes they don’t have the time because other things get their attention, such as games and friends,” Woo told AFP at his parish, where he records and uploads videos.

Wearing his vestments, Woo takes part in dance and emoji challenges. He also shares more sombre footage of his sermons for his more than 65,000 followers.

“The church really needs to keep up with the times,” Woo said. “There are many creative ways how we can reach out to people, especially now that we are given the gift of digital technology.” JB