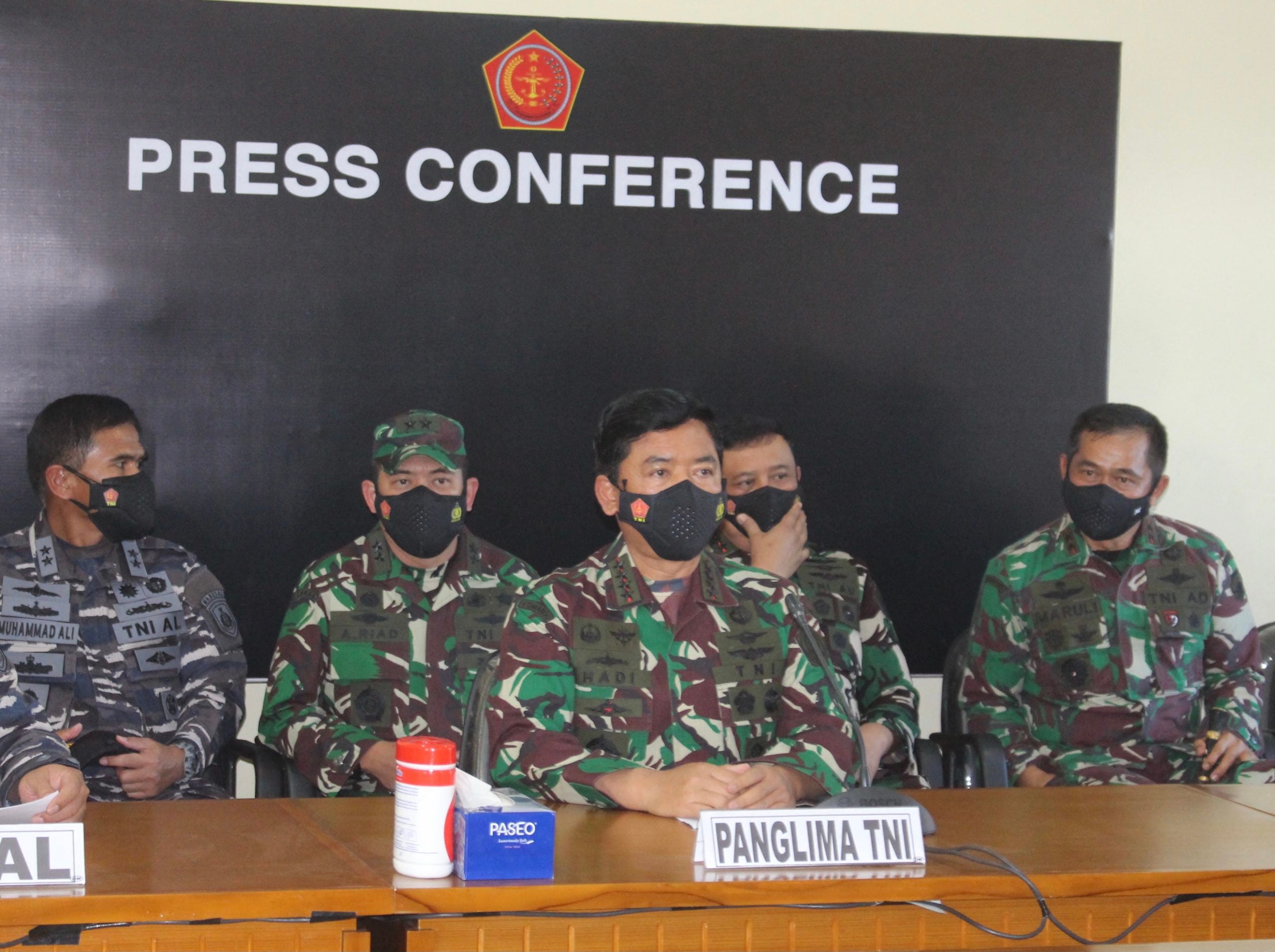 Indonesian military chief Hadi Tjahjanto (C) speaks during a press conference in Denpasar on April 24, 2021, as search operations continued off the coast of Bali for the Navy’s KRI Nanggala (402) submarine that went missing on April 21 during a training exercise. (Photo by Yuda MARUTHA / AFP)

BALI, Indonesia — An Indonesian submarine that went missing off the coast of Bali has sunk, the navy said Saturday, dashing hopes of rescuing any of its 53 crew.

The navy’s chief said a search party had recovered fragments from the KRI Nanggala 402 including items from inside the vessel, whose oxygen reserves were already believed to have run out.

Warships, planes, and hundreds of military personnel have been searching for the stricken vessel. Authorities had said the German-built craft was equipped with enough oxygen for only three days after losing power.

“We have raised the status from submiss to subsunk,” navy chief Yudo Margono told reporters, adding that the retrieved items could not have come from another vessel.

“(The items) would not have come outside the submarine if there was no external pressure or without damage to its torpedo launcher.”

Navy officials displayed several items including a piece of its torpedo system and a bottle of grease used to lubricate a submarine’s periscope.

They also found a prayer mat commonly used by Muslims. Indonesia is the world’s most populous Islamic nation.

Margono said the hunt for the submarine — and sailors — would continue, but warned that deep waters made the recovery effort “very risky and difficult”.

“We don’t know about the victims’ condition because we haven’t found any of them. So we can’t speculate,” he said in response to questions about the possibility of survivors.

“But with the (discovery) of these items, you can make your own conclusion.”

The submarine — one of five in Indonesia’s fleet — disappeared early Wednesday during live torpedo training exercises off the Indonesian holiday island.

An oil spill spotted where the submarine was thought to have submerged pointed to possible fuel-tank damage, fanning fears of a deadly disaster.

There were concerns that the submarine could have been crushed by water pressure if it sank to depths topping 700 meters (2,300 feet) — well below what it was built to withstand

The vessel was scheduled to conduct the training exercises when it asked for permission to dive. It lost contact shortly after.

Authorities have not offered possible explanations for the submarine’s sudden disappearance or commented on questions about whether the decades-old vessel was overloaded.

The military has said the submarine, delivered to Indonesia in 1981, was seaworthy.

Neighboring Singapore and Malaysia, as well as the United States and Australia, were among nations helping in the hunt with nearly two dozen ships deployed to scour a search zone covering about 10 square nautical miles (34 square kilometers).

Australia’s HMAS Ballarat arrived earlier Saturday with a US P-8 Poseidon aircraft helping to look for the craft.

Indonesia’s military said earlier it had picked up signs of an object with high magnetism at a depth of between 50 and 100 meters (165 and 330 feet), raising hopes of finding the submarine.

Among the worst was the 2000 sinking of the Kursk, the pride of Russia’s Northern Fleet.

That submarine was on maneuvers in the Barents Sea when it sank with the loss of all 118 aboard. An inquiry found a torpedo had exploded, detonating all the others.

Most of its crew died instantly but some survived for several days before suffocating.

In 2003, 70 Chinese naval officers and crew were killed, apparently suffocated, in an accident on a Ming-class submarine during exercises in 2003.

Five years later, 20 people were killed by poisonous gas when a fire extinguishing system was accidentally activated on a Russian submarine being tested in the Sea of Japan.

And in 2018, authorities found the wreckage of an Argentine submarine that had gone missing a year earlier with 44 sailors aboard.

Read Next
Drilon to file resolution censuring Parlade over ‘stupid’ remark
EDITORS' PICK
Synology NAS: A photo storage and multimedia server for your home
Ahead of ONE: Full Blast II, Mongkolpetch warns Elias Mahmoudi: ‘Watch out for my fists’
Local gov’ts may start COVID-19 vaccination of poor residents using excess supply
Alex Eala wins Grand Slam on Independence Day: ‘I hope I made my contribution to the country’
Tighter curbs sought in provincial COVID-19 hot spots
DILG takes over Cotabato town as all officials go on quarantine
MOST READ
‘Hindi pwedeng take 2,’ Sotto tells presidential, VP aspirants
Not even found in Tiktik: Another bad word snuck into DepEd materials
Lacson: Kind-hearted Leni ‘in it to win’ presidency in 2022, but…
NCR Plus remains under GCQ from June 16-30
Don't miss out on the latest news and information.