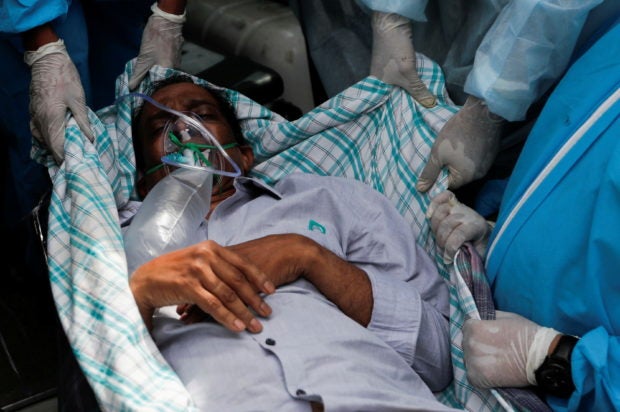 A patient suffering from the coronavirus disease (COVID-19) is evacuated from a hospital after it caught fire in Virar, on the outskirts of Mumbai, India, April 23, 2021. (REUTERS)

NEW DELHI -People across India scrambled for life-saving oxygen supplies on Friday and patients lay dying outside hospitals as the capital recorded the equivalent of one death from COVID-19 every five minutes.

For the second day running, the country’s overnight infection total was higher than ever recorded anywhere in the world since the pandemic began last year, at 332,730.

India’s second wave has hit with such ferocity that hospitals are running out of oxygen, beds and anti-viral drugs. Many patients have been turned away because there was no space for them, doctors in Delhi said.

Ambulance sirens sounded throughout the day in the deserted streets of the capital, one of India’s worst hit cities, where a lockdown is in place to try and stem the transmission of the virus.

Mass cremations have been taking place as the crematoriums have run out of space.

At Guru Teg Bahadur Hospital in the north east of the city, critical patients gasping for air arrived in ambulances and autorickshaws. Some waited for hours on trolleys outside and one, Shayam Narayan died before being admitted, a death unlikely to be counted in the city’s rising toll.

“The system is broken,” his younger brother Raj said.

Tushar Maurya, whose mother was being treated inside, urged anyone not in a serious condition to keep away.

“The staff are doing their best but there is not enough oxygen,” she said.

“People are dying in front of hospitals while they wait for a bed to become available,” one man said.

Another young man, who was not identified, said “Is this why we voted for this government? When we need it the most, we find ourselves all alone. Where will the poor go?”

Health experts say India became complacent in the winter, when new cases were running at about 10,000 a day and seemed to be under control, and lifted restrictions to allow big gatherings.

Modi himself has faced rare criticism for allowing political rallies and a Hindu religious festival, in which millions take a ritual bath in the Ganges river, to go ahead. He addressed many of the rallies with packed crowds and few people wearing masks.

“Indians let down their collective guard,” Zarir Udwadia, a pulmonologist on Maharashtra’s task force, wrote in the Times of India newspaper.

“We heard self-congratulatory declarations of victory from our leaders, now cruelly exposed as mere self-assured hubris.”

Delhi’s government declared in February it had beaten back the coronavirus. On Friday, Chief Minister Arvind Kejriwal went on live television to plead for medical oxygen supplies in a virtual meeting with Modi, warning that many people would die.

“All of the country’s oxygen plants should immediately be taken over by the government through the army,” he said.

Modi said the government was making a “continuous effort” to increase oxygen supplies, including steps to divert industrial oxygen.

In Washington, U.S. health officials and a White House spokeswoman on Friday said they were weighing how to help India and had been in contact with officials there, but gave no details on any possible U.S. action.

In Mumbai, a fire broke out in a suburban hospital treating COVID-19 patients early on Friday, killing 13 people. On Wednesday, 22 patients died at a public hospital in Maharashtra where Mumbai is located when oxygen supply ran out due to a leaking tank.

World Health Organization chief Tedros Adhanom Ghebreyesus said he was concerned about the growing case load in India, which on Thursday passed the previous global high of 297,430 recorded in January in the United States, where case numbers have fallen.

“The situation in India is a devastating reminder of what the virus can do,” he told a virtual briefing in Geneva.

WHO emergencies director Mike Ryan said reducing transmission would be a “very difficult task” but the government was working on limiting mixing between people, which he said was essential.

Bhramar Mukherjee, a professor of biostatistics and epidemiology at the University of Michigan in the United States, said it seemed as if there was no social safety net for Indians.

“Everyone is fighting for their own survival and trying to protect their loved ones,” he said. “This is hard to watch.”