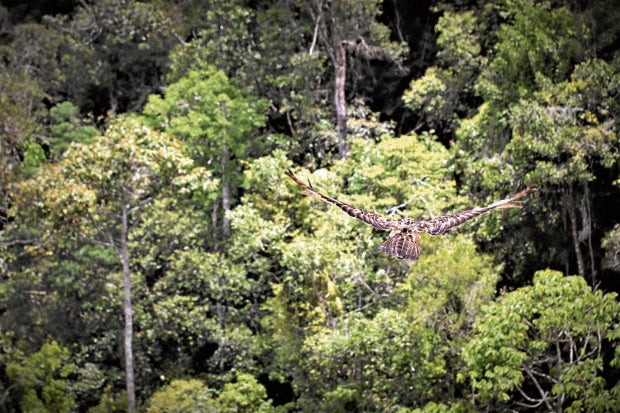 BACK TO THE WILD  – Tagoyaman, a 4-year-old Philippine eagle, returns to his forest home in Bukidnon on Earth Day, April 22, after about five months in the care of the Philippine Eagle Foundation. —PHOTO COURTESY OF PHILIPPINE EAGLE FOUNDATION

SURIGAO CITY—Eagle conservationists released a young raptor back to the wild on Thursday, in time for Earth Day, some five months after it underwent rehabilitation at the Philippine Eagle Center in Davao City.

A video released by the Philippine Eagle Foundation (PEF) on Friday showed the male eagle, named Tagoyanan Fernando, walking out of the cage perched on a wooden table, and then spreading its wings to a flight of freedom.

The release was made near a forest in San Fernando town in Bukidnon province where the eagle was rescued last October by Datu Tagoyaman Sinangkap. It was caught in a native hunting trap intended for other animals.

The raptor, estimated to be 4 years old, was named Tagoyaman Fernando to honor its rescuer and the place where it was found.

A joint statement by the PEF and the Australian Embassy, which has been supporting the PEF, said the raptor is among the seven rescued last year, the highest count recorded in the history of Philippine eagle conservation.

Tagoyaman was also the first to be released back to the wild this year, now fitted with a global positioning system transmitter to help conservationists track its movement.

“We hope to see Tagoyaman successfully breed and contribute to his species’ wild population in the future. His release on Earth Day is also our resounding call for long-term solutions to our problematic relationship with nature and wildlife,” said PEF executive director Dennis Salvador.

“Rescuing, rehabilitating and releasing Philippine eagles in the middle of a pandemic is very challenging. It’s difficult to mobilize field operations when travel restrictions are imposed and sources of funds are shut down,” Salvador added.

Apart from the Australian government, Salvador also acknowledged the support of Whitley Fund for Nature, Jurong Bird Park, the northern Mindanao field office of the Department of Environment and Natural Resources, and the local governments of San Fernando town and Bukidnon province for making the return of Tagoyaman to its forest home a success. 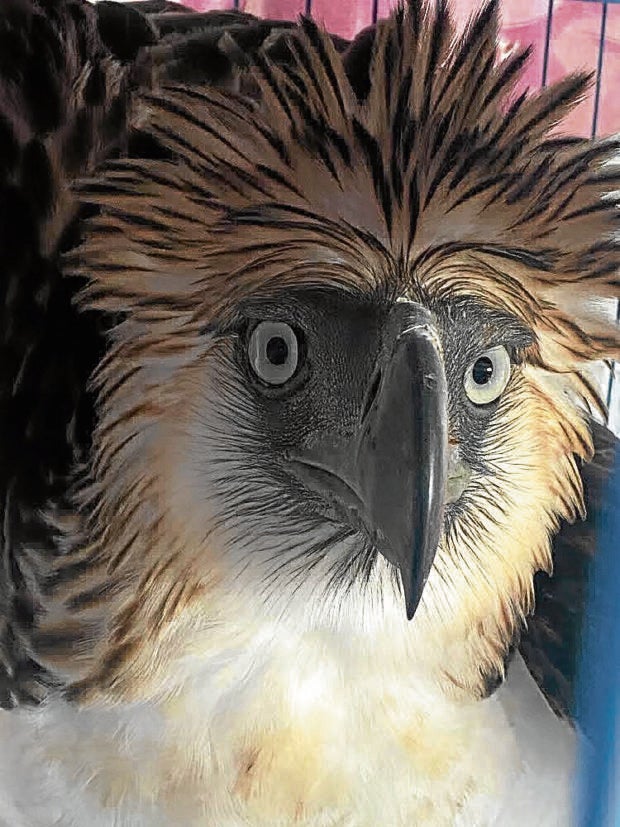 BIRD OF PREY – Tagoyaman Fernando is named after its rescuer and the place where it was found. —PHILIPPINE EAGLE FOUNDATION PHOTO

“The Australian Embassy is proud to continue our support to the Philippine Eagle Foundation for the protection and preservation of the Philippine eagle,” said Robinson.

“Australia stands with our friends in the Philippines as they protect their natural resources, in their lands or seas. This initiative reinforces our deep and expanding relationship as we celebrate the 75th anniversary of diplomatic relations between our two countries,” Robinson added.

Prior to the release, the PEF held education drives in communities around the San Fernando forest to gain their cooperation in protecting the raptor population there.

Salvador said they also organized forest guards among the indigenous tribe in the area and trained them to do forest patrols and monitoring of Tagoyaman’s movements.

“Collaborations and partnerships play a big role in Philippine eagle conservation. The PEF can’t save the eagles alone. We need the help of our local communities, government agencies, the private sector and the Filipino people so that one day Philippine eagles will thrive in the wild,” said Salvador. INQ