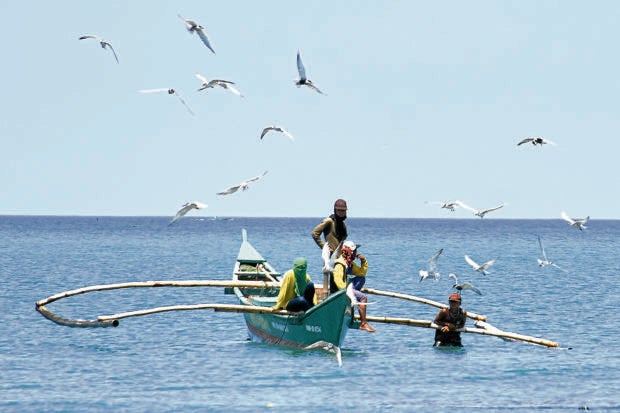 RISKY – Fishermen from Pangasinan and Zambales provinces have found alternative fishing grounds within provincial waters as a voyage to the Scarborough Shoal remains risky due to the presence of Chinese vessels. —WILLIE LOMIBAO

SAN ANTONIO, ZAMBALES—More than 1,500 fishermen in Masinloc have totally deserted the contested Scarborough Shoal, which for decades served as their traditional fishing ground.

Fisherman Bobby Roldan revealed they have not been near the shoal since January, as the fear of getting driven away by the Chinese vessels occupying the area has forced them to look for other areas to fish or to find alternative sources of livelihood.

“It’s now scary to go there. The harassment of Filipino fishermen by the Chinese Coast Guard occupying these islands in the West Philippine Sea is a serious threat to us,” Roldan, the vice chair of the fisher group Pamalakaya in Central Luzon, told the Inquirer in interview on Thursday.

Locally known as Panatag or Bajo de Masinloc, the shoal is a triangle-shaped chain of reefs and islands around a 150-kilometer wide lagoon.

Abundant marine resources in the shoal and its surrounding waters draw fishermen from both China and the Philippines, which both claim it as part of their territory.

It is located inside the country’s 370-km exclusive economic zone. The closest Philippine land mass is Palauig town, also in Zambales, which is about 220 km away.

In 2012, China seized control of the shoal after a tense standoff with the Philippine Navy, which led the Philippine government to file a case against China before the international arbitration court.

Part of the ruling, which came out in 2016, classified the shoal as a traditional fishing ground that should be shared by neighboring countries.

But China continues to control the shoal despite the verdict.On multiple incidents in the last decade, Filipino fishermen were chased by the Chinese Coast Guard, driving them away using water cannons.

In 2018, fishermen in nearby Pangasinan town said the Chinese Coast Guard routinely boarded their fishing boats, opened their storage boxes and got their fish hauls.

According to Roldan, Zambales fishermen had been hesitant to return to the shoal since January this year when China passed a law that month that allows its coast guard to fire on foreign vessels that would encroach on its jurisdiction at sea.

Roldan described this law as “too dangerous” for Filipino fishermen who are venturing out to the open sea.

When some groups of fishermen from the towns of Masinloc and Sta. Cruz tried to sail to the shoal early this month, Roldan said they were blocked by the Chinese vessels.

“The Chinese Coast Guard honked its horn to cause a blasting sound and used water cannons to prevent our fellow fishermen from getting close to the shoal,” Roldan said.

He said these fishermen had been caught in an inclement weather and had no place to seek refuge. Some of them have yet to return home.

The Scarborough Shoal also serves as a shelter from storm for Filipinos and other foreign fishermen in the area.

“These Chinese vessels that are in the West Philippine Sea are not there to fish. It looks like they exploring oil or taking our marine resources,” claimed Roldan.

In his regular public address on Monday, President Duterte said he would only send warships to “stake a claim” in the disputed West Philippine Sea if China should start drilling for oil and taking other resources from the area.

Duterte said drilling the oil in the West Philippine Sea and taking other resources was not “part” of his agreement with China.

“We still hope to return to the shoal when the ongoing tension between China and our country eases,” Roldan said.

He said the Philippine Coast Guard should assist the fishermen when they go on a fishing expedition in the shoal. INQ