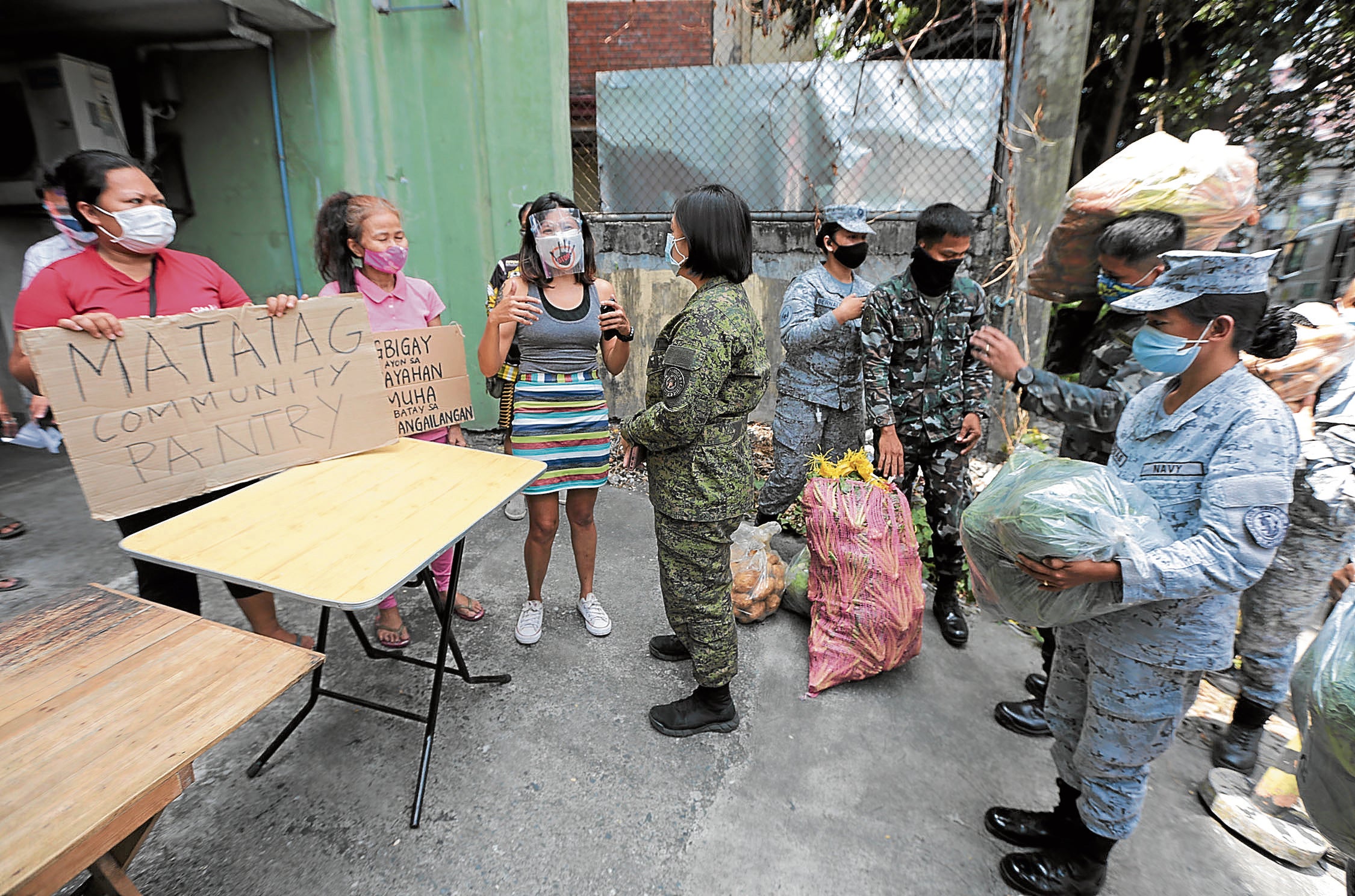 SURPRISING DONOR  – A team from the Civil Relations Service of the Armed Forces of the Philippines shows up on Thursday with sacks of produce for donation to a community pantry on Matatag Street, Barangay Central, Quezon City. —GRIG C. MONTEGRANDE

Armed Forces of the Philippines chief of staff Gen. Cirilito Sobejana has expressed support for community pantries and is thinking of offering each soldier’s daily allowance to help sustain them, despite the counterinsurgency task force’s firm suspicion that the food aid project is a communist effort.

“Kindness is everyone’s co­lor. Whatever your belief, as long as the help you’re giving is from the heart, we will support that,” Lorenzana said in a statement issued on Thursday.

“We are ready to assist if requested by local government units and the Department of the Interior and Local Government and, if necessary, to deploy the AFP Mobile Kitchens where they are needed,” he said.

In a virtual press briefing on Thursday, Sobejana said he had reminded Lt. Gen. Antonio Parlade Jr., spokesperson of the National Task Force to End Local Communist Armed Conflict (NTF-Elcac), to be “very deliberate and exercise due diligence” in word and deed.

Parlade has Red-tagged Maginhawa Community Pantry organizer Ana Patricia Non and contended that similar setups had links with the Communist Party of the Philippines-New People’s Army (CPP-NPA), thus the need for the task force to “check” their activities.

The “checking” has intimidated the organizer of a community pantry in Pandacan, Manila, into closing it down. She announced her decision online on Thursday, saying she felt uneasy after policemen came to the site on Monday and told her to fill out a form specifying personal details.

But Sobejana said: “All humanitarian efforts are being supported by us especially during this time. I should say we are in turmoil with COVID-19, with what’s happening in the West Philippine Sea, with our internal security problem. We have many problems.”

With the lockdowns enforced during the pandemic, many Filipinos cannot work and need help in securing the basic necessities, Sobejana said, adding: “This gesture of feeding our less fortunate brothers is a humanitarian action which your Armed Forces, being the protector of the people, is supporting.”

Sobejana said he had directed the AFP deputy chief of staff for civil-military operations to order all units, particularly those involved in civilian relations, to support community pantries and similar efforts.

“In fact,” he said, “we are looking for funds for this purpose, and I’m even contemplating convincing the members of the [AFP] to donate one day of our subsistence allowance. With that, we will be able to accumulate a substantial amount to support … the community pantry or similar humanitarian undertakings.”

Parlade told CNN Philippines on Thursday that he also backed community pantries but there is need to check some of them for links to the CPP-NPA.

He said he was not engaged in “profiling” and that it was the media that “chose that term to make things controversial, like ‘Red-tagging.’”

“We understand that we need to support this kind of initiative,” he said, referring to community pantries. “This is what we call ‘bayanihan.’ It’s not only now [that] we’re doing this. In fact, in the AFP, we contribute one day, two days, three days of subsistence allowance to give to poor communites in Lucena [in Quezon].”

But in a Facebook post, the pantry organizer in Pandacan, Manila, said she stopped the effort because she and her family were frightened.

Writing in Filipino, she said: “We decided to stop the community pantry … because my family is scared we might get Red-tagged. I don’t know what else they could do with that form that we filled out. I hope you understand our situation.”

The police visit to the Pandacan pantry was made a day before Manila Mayor Francisco “Isko Moreno” Domagoso announced that community pantries are allowed in the city and that a permit is not required to put up one.

“A directive was already given to the [Manila Police District] not to disturb [anyone] doing good deeds. It’s a city policy,” Domagoso said on Thursday.

He said the Pandacan pantry is welcome to reopen with protection from the city government.

The University of the Philippines Diliman again came to the defense of Maginhawa Community Pantry’s Non as well as other alumni.

“Red-tagging again?” an exasperated UP Diliman Chancellor Fidel Nemenzo said in an online webinar, adding that the NTF-Elcac had not learned from its failed campaign last year to brand a number of UP alumni as communist rebels.

Nemenzo said Red-tagging “has no place in our society” and “is a threat to our constitutional right to freedom of expression.”

“It places people in harm’s way and shames those who are helping others in a time of need,” he said.

Nemenzo also urged the UP community to “support and volunteer” for the pantries, which continue their operations despite the threat of Red-tagging.

In UP alone, which has several urban poor communities within the campus, there are six pantries, with two more in the pipeline, said University Student Council president Froilan Cariaga.

Read Next
Hospitals on PhilHealth debt: ‘That’s our money, but our hands are tied’
EDITORS' PICK
PDP-Laban exec insists Pacquiao didn’t criticize Duterte on West PH Sea issue
Tired of your Wi-Fi signal problems at home? Here’s a solution!
No trees will be harmed in building of Nayong Pilipino vaccination hub – DOT
Get a chance to win 5G smartphones with Smart Signature Plans
Time to hurry up immunization before vaccines expire – Bayan Muna
Marian Rivera partners with JC to boost public health awareness
MOST READ
Sharon Cuneta flies to LA to take some time off: ‘I need to breathe, collect myself’
U.S. sends envoy as Israel-Gaza barrages spiral, Hamas commander killed
Pangilinan: Is Roque getting his salary from China?
More Chinese maritime militia ships return to West Philippine Sea
Don't miss out on the latest news and information.