MANILA, Philippines — The National Privacy Commission (NTC) urged for an end to any “unjust” and “unwarranted” profiling of community pantry organizers on Thursday, saying these “pandemic heroes” shouldn’t be red-tagged.

“We have always been firm in our stand that unjust profiling activities are unwelcome due to the risks it entails to our citizens, such as discrimination and stereotyping,” said Liboro in a statement.

Liboro explained that labels like these are pointless when people are struggling to survive. 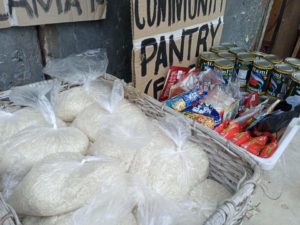 The National Privacy Commission (NTC) is the latest to speak out against red-tagging community pantry organizers. Photo from Marikit Arellano’s Facebook page

He added that due to the “unwarranted” profiling of organizers of the community pantries, the people behind the food-donation movement “have been discouraged from continuing this activity because of red-tagging.”

Liboro said that people should not fuel discrimination, especially in these trying times.

“We must aim to build a united community driven by volunteerism with the genuine desire to help others and the needy,”

Just this Tuesday, the NPC also urged the Philippine National Police to look into the alleged profiling of community pantry organizers, emphasizing that collecting personal data must be done “fairly and lawfully.”

Meanwhile, since Parlade red-tagged Non and the community pantries, several senators have called for defunding the National Task Force to End Local Communist Armed Conflict (NTF-Elcac). Parlade is the spokesperson of NTF-Elcac.

Senators said that the government should relocate the P19.5-billion budget allocated to the National Trust Fund-Elcac to help pandemic-hit citizens.

The community pantry initiative started after Non, a small business owner in Diliman, Quezon City, set up a shared pantry in hopes of helping her community amid the worsening COVID-19 pandemic.

Since then, Non said about 350 community pantries have opened across the country.

Critics said that the initiative reflects the government’s slow response in giving aid to communities affected by the pandemic.