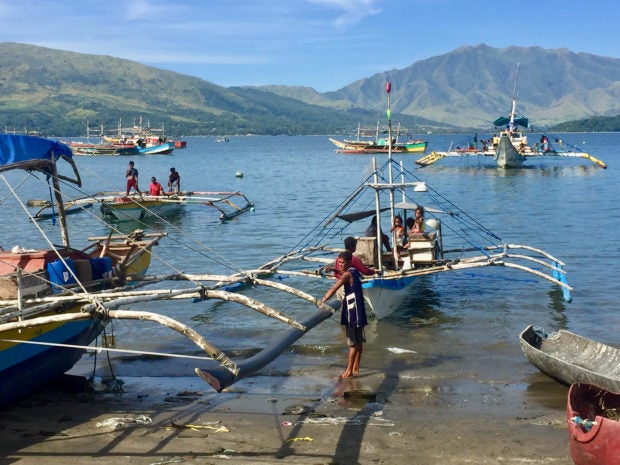 These fishermen in Zambales province are among those who would at times go to the Scarborough Shoal (locally known as Panatag Shoal), 270 kilometers west of Zambales, for a fishing venture. Chinese fishing vessels are still seen moored near the traditional fishing ground of Filipinos, according to their fellow fishermen in Pangasinan. PHOTO BY JOANNA ROSE AGLIBOT

DAGUPAN CITY—Some fishermen in the town of Infanta, Pangasinan province reported seeing a “peaceful co-existence” between Filipino and Chinese fishermen at the Scarborough Shoal and expressed hope that tension in the West Philippine Sea (WPS) would not escalate.

“The Chinese fishermen are not driving us away from the shoal and our fishing boats can stay there without disturbance,” said Eric Naboa, president of Cato Infanta Fishermen’s Association Inc. in a phone interview with Inquirer on Wednesday (April 21).

“But there are still some parts that are off limits to us,” Naboa said.

The group has at least 100 members, most of whom are small boat owners.

President Rodrigo Duterte on Monday (April 19) said the West Philippine Sea is no longer in Philippine possession as China has taken over the area that is inside the Philippines exclusive economic zone (EEZ).

He said the Philippine government could regain control of the area only by force and going to war.

If the territorial dispute escalated, Naboa said Filipino fisherman “may not be allowed to enter the shoal and we would have no shelter when there are typhoons.”

“We would be greatly affected,” Naboa said. “But it is the President’s decision on what to do. We can only hope that he would always put into consideration the plight of many fishermen,” he said.

Aside from commercial fishing boats, small boats that are registered with the municipal government could freely roam the shoal, a traditional fishing ground of Filipinos, some 270 kilometers west of Pangasinan and Zambales provinces.

He said an undetermined number of Chinese vessels linger around the shoal. “They’re not leaving,” Naboa said.

Legaspi said he sympathizes with Pangasinan fisherfolk who must face the Chinese vessels every time they ventured out into the West Philippine Sea.

“It’s like our seas have been given away,” Legaspi told the Inquirer in an interview.

In 2015, Legaspi was one of the Infanta fishermen who petitioned the UN High Commissioner for Human Rights to order China to respect their right to livelihood and adequate food and their right to life.

In Zambales, fisherman Bonifacio Amata, 68, of San Antonio town, said the conflict in the West Philippine Sea has been hurting the fishermen’s only source of livelihood.

He and his fellow fishermen have been asking the government to help them amid their dwindling fish catch, which they said was due to the presence of Chinese vessels.

The declining amount of marine resources in the West Philippine Sea is no longer just about territorial dispute but a “gut issue” for Filipino fishermen, said nongovernment groups Pinoy Aksyon for Governance and the Environment and Homonhon Environment Rescuers Organization.

“We remind the government, particularly the Bureau of Fisheries and Aquatic Resources to do everything to fulfill its mandate to limit access to the fishery and aquatic resources of the Philippines for the exclusive use and enjoyment of Filipino citizens,” the two groups said in a joint statement on April 17.