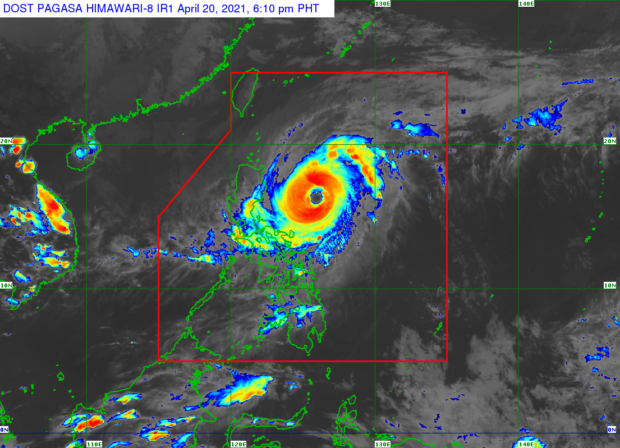 MANILA, Philippines — Typhoon Bising has maintained its strength and may gradually weaken as it possibly leaves the Philippines by Sunday as a severe tropical storm.

Based on the state weather services Tuesday afternoon bulletin, Bising was last spotted 475 kilometers east of Baler, Aurora, packing maximum sustained winds of 175 kilometers per hour (kph) near the center and gustiness of up to 215 kph.

but state meteorologists said that it may gradually weaken as it slowly exits the Philippine area of responsibility (PAR).

The Philippine Atmospheric, Geophysical and Astronomical Services Administration (Pagasa) said the typhoon was still moving north-northwest at a slow pace and likely be at 315 kilometers east of Tuguegarao City in Cagayan by Wednesday afternoon.

The closest point at which Bising will be to land is around 290 kilometers east of Calayan, Cagayan on Thursday afternoon.  After that, the typhoon may start recurving to the east, towards the Pacific Ocean, according to Pagasa.

It is then predicted to exit the Philippine area of responsibility by Sunday afternoon, probably as a severe tropical storm, it added.

For now, however, certain areas in Luzon remain under Tropical Cyclone Wind Signal No. 2, which means that wind speeds of 61 kph to 120 kph may be felt in these areas within the next 24 hours:

The following areas in Luzon, meanwhile, are under Signal No. 1:

Pagasa said sea travel is not allowed in waters adjacent to towns under a tropical cyclone wind signal.  Also, a gale warning remains over the waters of Ilocos Norte, Cagayan, including the Babuyan Islands, and the northern and eastern waters of Eastern Visayas.

20 crew missing after vessel runs aground amid Typhoon Bising

Read Next
Leader of Cebu City police team facing robbery, rape cases found dead
EDITORS' PICK
Want to help local farmers? Shop small and eat Real Food
Manila is 78th most expensive city in the world for foreign workers
ICC is everything but a court of ‘white people’
Garcia softens stance, meets IATF halfway on swab-upon-arrival policy
Piolo Pascual: The Ultimate Heartthrob continues to level up
TeaM Energy pushes development programs to help in pandemic rebound
MOST READ
Sharon Cuneta on living in the US: ‘Nagagawa ko lahat ng normal na bagay’
Mike Nieto asks fans: ‘No below the belt remarks’ toward South Korea
ICC is everything but a court of ‘white people’
Duterte-Duterte tandem possible but ‘winnability is another question’ — Binay
Don't miss out on the latest news and information.