SWOLLEN At least seven villages are isolated after heavy rain dumped by Typhoon “Bising” caused a river to swell and overflow onto a spillway in San Miguel, Catanduanes, on Monday. —KARLO BAGADIONG / PHILIPPINE INFORMATION AGENCY CATANDUANES

MANILA, Philippines — Typhoon Bising (international name: Surigae), the first typhoon to hit the country this year, lashed at provinces in the Bicol and Eastern Visayas regions and even as far as the Caraga region in northeastern Mindanao, forcing tens of thousands to evacuate.

While its eye remained at a good distance from Luzon island, its outer rain bands brought strong rain and gusts to the eastern portion of the country on Sunday and Monday.

On Tuesday, moderate to heavy rains are still expected over the Bicol region and Northern Samar province, the Philippine Atmospheric, Geophysical and Astronomical Services Administration (Pagasa) said on Monday.

The downpour from the typhoon is also expected over the northern portion of Aurora province and the eastern portions of mainland Cagayan and Isabela toward the north of Luzon.

Bising maintained its strength on Monday as it slowly moved over the Philippine Sea, east of the archipelago.

As of 4 p.m. Monday, the center of its eye was located 500 kilometers east of Infanta in Quezon province.

According to Pagasa, the typhoon is expected to linger inside the Philippine territory for the rest of the week, but is forecast to gradually lose its strength.

Forecasters say Bising will move generally northward or north-northwestward until Wednesday evening or early Thursday. It is expected to recurve afterward and move away from the Luzon landmass.

Reports as of Monday afternoon showed at least two typhoon-related fatalities in the Visayas.

A 79-year-old man in Southern Leyte and a 47-year-old woman in northern Cebu died on Sunday after they were hit by coconut trees toppled by strong winds.

According to Lt. Mario Lumayno, police chief of Saint Bernard town, Southern Leyte, Alberto Wales went out of his house to check on people making a bamboo panel as reinforcement against strong winds. A coconut tree then fell on him. 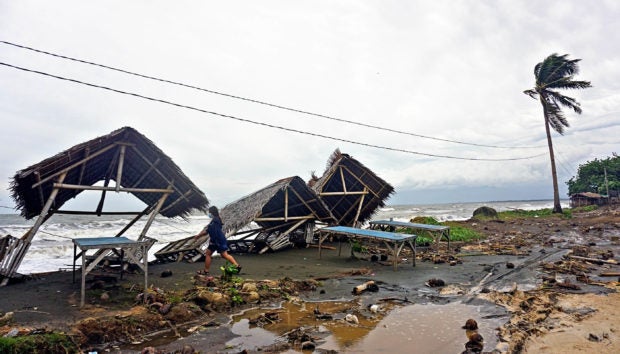 BEACH DEBRIS Beach cottages along the coastal village of Masao in Butuan City are destroyed by strong winds and waves as Typhoon “Bising” (Surigae) sweeps through the eastern coastline of the country. Bising is expected to gradually weaken as it remains in Philippine territory for the rest of the week. —ERWIN MASCARIÑAS

Olivia Popoy of Panalipan village in Catmon, Cebu, was sleeping when a coconut tree fell on her house and hit her. Her husband and daughter were injured.

In Northern Samar, 1,581 families consisting of 5,667 people from 14 towns were evacuated, while in Eastern Samar, 715 families comprising 2,667 people were taken to safer ground amid the threat of flooding since Sunday.

In Samar, 272 families (1,045 people) from the capital Catbalogan City and two neighboring towns were also evacuated, while in Biliran province, 210 families (739 people) from the towns of Cabucgayan, Culaba and the provincial capital of Naval were taken to evacuation centers.

At least 101 families (276 people) from six towns in Leyte were also evacuated. In the provincial capital of Tacloban, 45 families (274 people) were taken to evacuation centers by city government personnel.

In the Bicol region, moderate to heavy rain prompted 15,852 families (57,793 people) to flee to evacuation centers.

According to the Office of Civil Defense (OCD) in the region, these residents are from Albay, Catanduanes, Camarines Sur, and Sorsogon provinces. They lived in areas prone to floods, landslides, and storm surges.

In the province of Agusan del Norte in Mindanao’s Caraga region, a storm surge with waves as high as 0.91 meter (3 feet) accompanied by strong winds struck several coastal villages on Sunday.

In the village of Calibunan in Cabadbaran City, about 32 families had to be evacuated as waves crashed into their homes.

Several fishing boats were damaged by strong waves in Tubay, one of four towns in Agusan del Norte hit by the storm surge.

In Butuan City, Janjan Alawiran, a resident of Masao village, said his family lost 40 of 50 beach cottages that they maintained after waves swelled and slammed the coastline on Sunday.

Other beachside cottages in the village were also damaged.

How did she do it? The woman who made the Chinese ships go away

Duterte vs Carpio, Del Rosario: From debate dare to threat of hanging