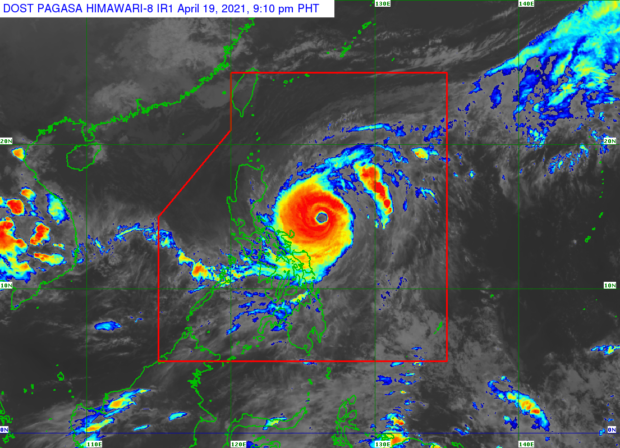 MANILA, Philippines — The government has earmarked P1.5 billion to respond to the needs of people affected by Typhoon Bising, the Department of Social Welfare and Development (DSWD) said Monday.

According to DSWD, they have already prepared emergency relief supplies as early as April 16, which includes “stockpiles and standby funds” like the P517 million quick response budget from its central office.

Latest forecast from the state weather bureau indicated that Bising was moving slowly off the eastern section of the country.

“Based on the 6PM, April 16 report of the Disaster Response Management Bureau (DRMB), the DSWD maintains stockpiles and standby funds amounting to more than P1.5 billion. Of which, more than P517 million is the available Quick Response Fund (QRF) in the DSWD Central Office,” DSWD said.

“In addition, the Department and its Field Offices (FOs) have 355,672 family food packs prepositioned in strategic locations around the country ready to be delivered to LGUs,” it added.

State weather experts said the typhoon was last seen Monday afternoon some 500 kilometers east of Infanta, Quezon province, adding that Bising was able to maintain its strength, packing maximum sustained winds of 195 kilometers per hour (kph) near the center and gustiness of up to 240 kph.

Areas in eastern Luzon and Visayas are still under Tropical Cyclone Wind Signals, but prior to that, Bising first affected Mindanao particularly the Caraga region. Many people were also stranded at ports as Bising caused strong waves, making sea travel risky.

“Meanwhile, the Quick Response Teams (QRTs) of DSWD FOs along the typhoon’s track are now on standby and ready to provide technical assistance, if needed, following the new normal protocols of the agency amid the pandemic,” it noted.

“The Department, as lead agency in the Food and Non-Food Item Cluster, Camp Coordination and Camp Management Cluster, and the Internally Displaced Persons  Protection Cluster of the National Disaster Risk Reduction and Management Council will continue to ensure the efficient and well-coordinated delivery of social protection services to the population that will be affected by the typhoon,” it added.

Read Next
Namibia surrogate newborns lose court battle for travel documents
EDITORS' PICK
Get a chance to win 5G smartphones with Smart Signature Plans
Tired of your Wi-Fi signal problems at home? Here’s a solution!
Esperon: ‘The master red-tagger is no other than Jose Maria Sison’
Ang init! Dagupan sizzles at 52°C
Time to hurry up immunization before vaccines expire – Bayan Muna
Marian Rivera partners with JC to boost public health awareness
MOST READ
Sharon Cuneta flies to LA to take some time off: ‘I need to breathe, collect myself’
PDP-Laban exec insists Pacquiao didn’t criticize Duterte on West PH Sea issue
Pangilinan: Is Roque getting his salary from China?
Trillanes to run for president in 2022 elections
Don't miss out on the latest news and information.