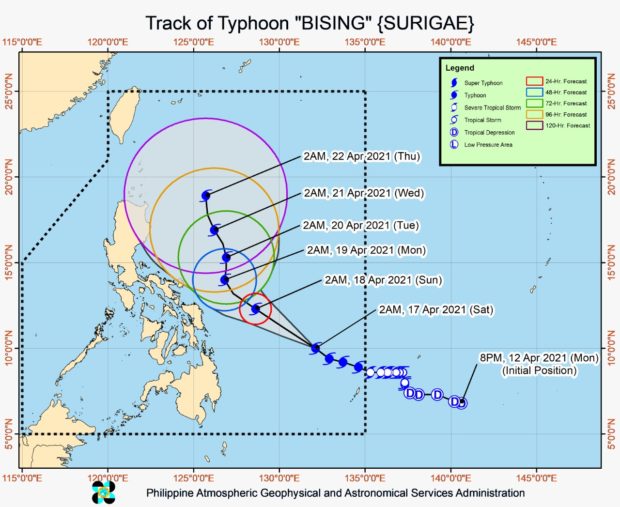 MANILA, Philippines — Typhoon Bising may pass closest to Cagayan Valley on Wednesday as the latest forecast track indicates that the weather disturbance may spend a longer time over the country’s eastern waters.

Bising was able to maintain its strength, packing maximum sustained winds of 195 kilometers per hour (kph) near the center and gusts of up to 240 kph according to  weather updates from the Philippine Atmospheric, Geophysical and Astronomical Services Administration (Pagasa) on Monday afternoon.

Pagasa’s forecast track shows that Bising may maintain its typhoon category status even if there is a chance that it would slightly weaken while moving west.  It is also not expected to hit land anymore, as the cone of uncertainty shows the nearest area that Bising could hit is the northernmost tip of Cagayan province.

From Monday afternoon to Monday night, moderate to heavy rains with at times intense rains will be felt in Bicol Region, Northern Samar, Samar, Eastern Samar, Biliran and the northern portion of Leyte.

Starting Tuesday, moderate to heavy rains will still occur over Bicol Region and Northern Samar, while light to moderate with at times heavy rains may prevail over the northern portion of Aurora and the eastern portions of mainland Cagayan and Isabela

“Under these conditions and considering the antecedent rainfall over the aforementioned areas, flooding (including flash floods) and rain-induced landslides are increasingly likely to occur especially in areas identified in hazard maps as highly or very highly susceptible to these hazards,” Pagasa said.

Tropical Cyclone Wind Signal No. 2 is still raised over the following areas:

Pagasa said that areas under Signal No. 2 may experience wind speeds of 61 kph to 120 kph in the next 24 hours.

Other parts of the country are also under a Tropical Cyclone Wind Signal No. 1, which means that they may feel wind speeds of 30 kph to 60 kph in the next 36 hours:

Pagasa reminded that no boats or sea crafts are allowed to set sail in areas under a tropical cyclone wind signal and a gale warning, which stretches from Ilocos Region’s waters to Cagayan Valley, down to Central Luzon, Southern Luzon, Bicol Region, Eastern Visayas’ waters, Central Visayas’ northern and eastern inland seas, and Caraga’s northern seaboards.