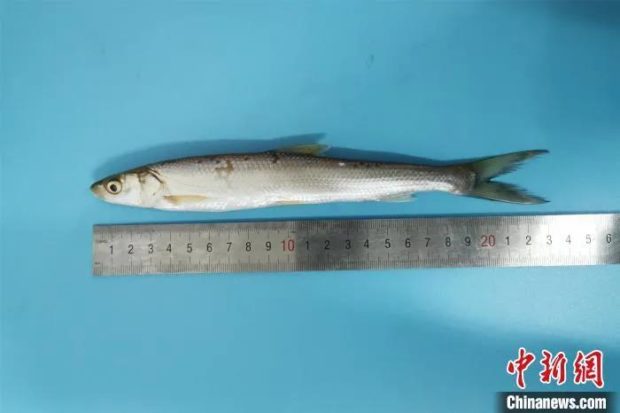 But he encountered one of the fish recently－about 23 centimeters long and weighing 47.4 grams－during routine monitoring of the lake.

Ochetobius elongatus used to be a common fish species in the Yangtze River basin. However, due to environmental destruction, overfishing and human disturbance, its population fell rapidly and it became a critically endangered species.

“I was pleasantly surprised and contacted other experts to double-check the species,” Wang said. “The small fish was about 1 year old, which indicates that its population is recovering.”

He said the last time the species was spotted was in 2012.

“It was like they had disappeared for a decade,” Wang said. “Poyang Lake has been sick.”

On Jan 1, a 10-year fishing ban took effect in the Yangtze River. That followed the enforcement of a similar ban in 332 conservation areas along the river a year ago to help it recover from dwindling aquatic resources and reduced biodiversity.

A 10-year fishing ban was also implemented at Poyang Lake from the beginning of last year. Some 100,000 fishermen near the lake have bid farewell to their centuries-old way of life and moved ashore.

“Ochetobius elongatus is back just one year after the fishing ban was implemented, which means the ban really works,” said Zhan Shupin from the Jiangxi Provincial Agriculture and Rural Affairs Department.

“Now, scientists use fishing nets in the lake only for scientific monitoring, and they can catch 200 or 300 fish in one net, compared to 40 or 50 before.”

A video shot by Zhan in the middle of last month showed long-lost scenes of fish leaping out of the water and spawning in waters near Mount Kangshan.

In June last year, scientists also saw a school of over 100 ribbonfish, the first time in nearly a decade that such a large population of the species had been identified.

The population of finless porpoises, believed to be the last surviving aquatic mammal in the Yangtze, Asia’s longest river, is expected to increase from about 450 now to 700 in the next decade, Zhan said.

“The magnificent scenes of cranes dancing and fish leaping over the flowing streams will soon reappear in Poyang Lake,” Zhan said. Xinhua