DOH says PH vaccination ranks 3rd in ASEAN, but data not based on population

MANILA, Philippines — The Philippines ranks third among Association of Southeast Asian Nations (ASEAN) countries on the number of COVID-19 vaccine doses that were so far administered, according to the Department of Health (DOH), although the data it presented was not based on the percentage of vaccinated individuals per population.

Data presented by Health Undersecretary Myrna Cabotaje in an online press briefing on Monday showed that the Philippines has already administered over 1.4 million vaccine doses, following Indonesia with 15.8 million doses and Singapore with 1.6 million doses.

“In terms of the ranking natin sa ASEAN, pumapangatlo tayo sa Indonesia and Singapore. May mga problema sa supply but even then ‘yung mga dumating sa atin, we were able to administer many of them kaya may 1.4 million [administered doses] na tayo,” she said.

(In terms of our ranking to ASEAN countries, we are third following Indonesia and Singapore. There are problems in the supply but we were able to administer many of the doses delivered to us. We have already administered 1.4 million doses.) 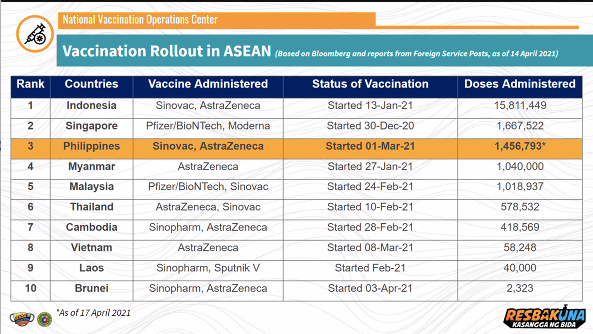 Data from the Department of Health

The table presented by Cabotaje was based on Bloomberg data and other reports from Foreign Service Posts as of April 14.

Reporters then asked why the DOH presented the ranking based on the number of doses administered instead of vaccinated individuals per population in each country. Cabotaje then explained that the data shows the speed of vaccination in the Philippines as compared to other countries.

“We have already reached the 1.4 million mark already. [We presented this] just to show you na kung may vaccine, naibabakuna naman (that if there are vaccines, we are able to administer it),” she said.

(That’s the data that Bloomberg has sourced—the number of jabs—and then we just supplied it. But we can look later at what could be the denominator, the total population that the countries target to vaccinate.)

Cabotaje noted that Singapore, being a smaller country than the Philippines, should have been able to vaccinate all its residents by now. However, she cited a shortage in the supply of vaccines that have been hampering its rollout.

“Ang problema all over the world is really shortage. Look at Singapore, they started earlier than us but they are at 1.6 million. It’s a small country. Dapat napabakuna na sila lahat. But I think there are also supply problems in Singapore. Just to show that we are also leveling up,” she added.

(The problem is there is really a shortage of supply all over the world. Look at Singapore, they started earlier than us but they are at 1.6 million. It’s a small country. They should have been able to vaccinate all their residents. But I think there are also supply problems in Singapore. We presented this to show you that we are also leveling up.)

Of the vaccine beneficiaries, 960,191 workers in frontline health services, 128,018 senior citizens, and 176,305 individuals with comorbidity have received their first dose of the vaccine.