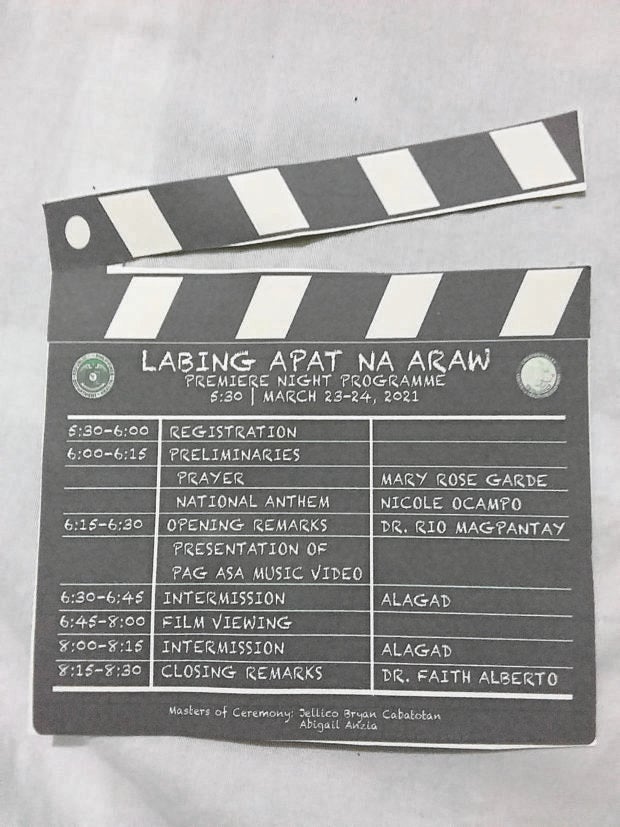 GALA NIGHT  – This ticket to the gala night of the training on disaster risk reduction management organized by the Department of Health in Cagayan Valley shows the participants’ schedule, which includes a premiere public showing of “Labing-apat na Araw,” an independent film produced by the agency. —CONTRIBUTED PHOTO

Residents in Nueva Vizcaya province have criticized some officials of the Department of Health (DOH) in Cagayan Valley for conducting a five-day training and holding a mass gathering of about 60 health workers at a private hotel that led to infections among the participants last month.

Sources, who spoke on condition of anonymity, blamed the DOH for its alleged recklessness for pushing through with the event, which included a movie premiere gala night at a hotel in Solano town.

“This is really embarrassing because while we keep restraining our people, telling them to obey safety protocols to prevent the spread of the disease, here we are having fun at an event that did not have anything to do with why we were gathered there in the first place,” a source said in a phone interview on April 4.

The holding of the event was corroborated by other training participants interviewed by the Inquirer this week.

There were no participants from Batanes due to the imposed travel restrictions by the local government from March 22 to 26, the same time that the training was being conducted.

On the second day of the training, the participants were subjected to rapid antigen tests, with kits provided by the DOH, wherein two of those tested yielded positive results. They were immediately told to go on isolation, according to multiple sources.

“We were disgusted to learn that one of the confirmed COVID-19 patients still dropped by at a convenience store at the town center to buy provisions, exposing other customers and store crew. Now we are struggling to track down all the close contacts,” a source said. That evening of March 23, the participants were gathered at the air-conditioned function hall of the Highlander Hotel in Solano town, and came in formal attire for what was touted as a gala night for the premiere public showing of “Labing-apat na Araw,” an independent film produced by the DOH Cagayan Valley regional office.

The movie supposedly depicts the realities in the life of health workers as they deal with the COVID-19 pandemic. Dr. Rio Magpantay, regional director of the DOH in Cagayan Valley, was the lead actor, playing the role of chief of a local hospital in the movie.

The Inquirer tried to reach Magpantay for comments but he has yet to respond.

The event has raised eyebrows even among the participants, because the gala night was not part of the five-day training they were supposed to attend. Another source said the participants, too, were uneasy that they were holding a mass gathering while at least two of their fellow trainees had already tested positive in the antigen tests administered among participants.

As the DOH training began, COVID-19 cases in the country had also started to spike, registering 7,998 new infections that day, then a new record high.

“While we understand that we also need to unwind a bit for our psychosocial well-being because of the stress we have to go through as front-liners in this pandemic, it leaves a bad taste in the mouth because we should be setting the example for ordinary Filipinos,” the informant said.

The training went on with the planned activities for two more days only to be cut short on the last day, according to sources.

“The instructions, which were relayed by word of mouth from the DOH staff, were for the participants with positive results to undergo immediate isolation in their home province, while those that are experiencing symptoms would need to undergo 14-day quarantine,” another source said.

Since all attendees were presumed to be close contacts of the infected participant, the prudent thing to do would have been to put everybody on quarantine and have them tested for RT-PCR, sources said.

But not everyone who attended the Nueva Vizcaya training observed precautions as a number of them reportedly went home to their families and reported back to work on Monday, March 29.

At least seven training participants have so far tested positive for COVID-19, though no official confirmation is given whether they acquired their infection from the Nueva Vizcaya event or they got it from elsewhere after their five-day training.

—WITH A REPORT FROM VILLAMOR VISAYA JR. INQ