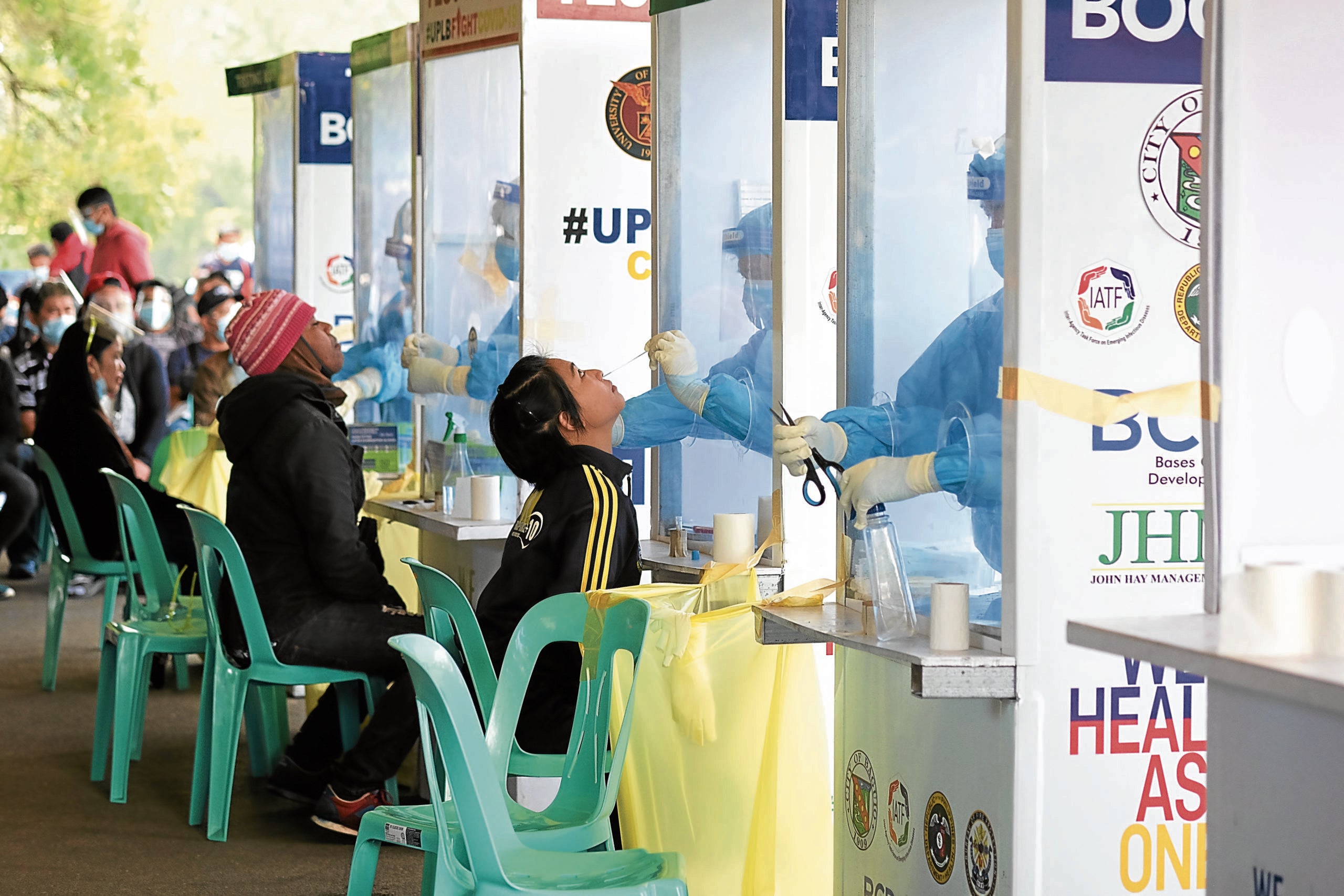 FIGHTING THE VIRUS  – Testing done in booths set up at Burnham Park is Baguio City’s first line of defense in the battle against COVID-19. —NEIL CLARK ONGCHANGCO

BAGUIO CITY—At least 17 people in the Cordillera have contracted the UK variant of COVID-19 this week, suggesting that this more contagious form of the virus is one of the reasons for the spike in cases in the region, the Department of Health (DOH) said on Thursday.

Nine of these patients are in Baguio, which has 1,406 active cases out of the 9,045 infections recorded in the city since last year.

The remaining UK variant cases are in Benguet and Kalinga provinces, with four cases each, said Dr. Amelita Pangilinan, regional director of the DOH in Cordillera, during an online press briefing.

The Cordillera now has a total of 58 patients with the UK variant (also known as B.1.1.7. SARS-CoV-2). Mountain Province still has the biggest concentration of cases of the British variant with 28, including the first batch of 11 patients recorded in January.

Pangilinan said 37 UK variant patients had recovered but four others died, including the country’s first UK variant fatality in Benguet.

“About 1,560 individuals have been identified as close contacts of the newly reported B.1.1.7 cases in Baguio, Benguet and Kalinga,” she said.

During a meeting of the Regional Inter-Agency Task Force for the Management of Emerging Infectious Diseases here on Wednesday, experts discussed the possibility that the spread of the variants may account for the sharp increase in the region’s virus transmissions.

But Pangilinan said breaches in health protocols, including the prohibition on gatherings, should be blamed for the spike.

“[The variant] is not the main factor,” she said, citing their observations of the community behavior in the Cordillera provinces.

As of April 14, Cordillera remained a high-risk zone based on the disease’s average daily growth rate.

Pangilinan said the region recorded a total of 25,048 patients, with 3,870 considered as active cases.Most of the infected are between 21 and 40 years old while 379 had died of the disease since the pandemic was declared last year.

In Isabela province, health officials also recorded two cases of the UK variant and a case of the South Africa variant on Tuesday.

Dr. Rio Magpantay, DOH regional director in Cagayan Valley, said these variants were linked to the high infection rate in the province, which has about 1,200 active cases.

The two patients are in the capital city of Ilagan, and both had already recovered from the disease, Magpantay said in a press briefing. The South Africa variant case is from Sta. Maria town.

Ilagan was also tagged as a high-risk area due to rising COVID-19 cases.

The surge in infections has forced the city government to impose a hard lockdown on its 44 villages from April 14 to April 21, Laggui said.