CHRISTIANITY’S ARRIVAL  – Actors reenact the first baptism in the Philippines during the celebration of the event’s 500th anniversary at Cebu City’s Plaza Sugbo, where the cross of Portuguese explorer Ferdinand Magellan is housed in a kiosk. —NESTLE SEMILLA

This was the message conveyed by Pope Francis as Filipinos on Wednesday marked the 500th anniversary of the first Catholic baptism in the country.

Speaking through a prerecorded video patch from Rome, the Holy Father urged Filipinos to keep going and to share the gift of faith they received five centuries ago.

“I am a witness that you know how to transmit the faith, and you do it well, be it in your own country or abroad,” he said.

“Thank God for the persons who have shared the faith with you and for the persons to whom you are to transmit the faith, renewing the desire to evangelize, to reach other people, and to bring hope and the joy of the Gospel,” he added.

At least 700 people gathered at Plaza Sugbo where the kiosk housing Magellan’s Cross is built. Each wore face masks and shields and observed physical distancing to follow health protocols.

Before the Mass, a reenactment of the first baptism on Philippine soil was staged in the same venue.

Pope Francis was represented by Archbishop Charles Brown, the papal nuncio to the Philippines.

In his message, the Holy Father lauded Filipinos for their resilience amid difficulties.

“How many difficult moments have you suffered? Earthquakes, typhoons, volcanic eruptions and the COVID-19 pandemic? But in spite of all the pain and devastation, you have known how to carry the cross, and to continue walking,” he said.

“You have suffered much, but also you have risen up one time after another. Continue working, reconstructing, helping one another. Thank you for giving witness to that fortitude and confidence in God, who never abandons us,” he said.

Pope Francis called on families to transmit to their children the faith that they received from their parents.

“Dear friends, I remember my visit to your country [in 2015]. I don’t forget that final meeting with almost 7 million people. You are generous. You are bountiful. You know how to celebrate the feast of faith. Don’t lose that even in the midst of difficulties,” he said.

In his homily, Archbishop Brown challenged Filipinos to “keep the flame of faith alive.”

Christian faith, he said, started in Asia where Jesus, a Jew, sent the Holy Spirit and summoned his apostles to continue His mission of bringing people back to God.

The faith was brought to Europe and was eventually taken to the Philippines.

“Now, Filipinos bring that faith to the world, not as explorers or colonizers, but in many cases as overseas Filipino workers,” Brown said. 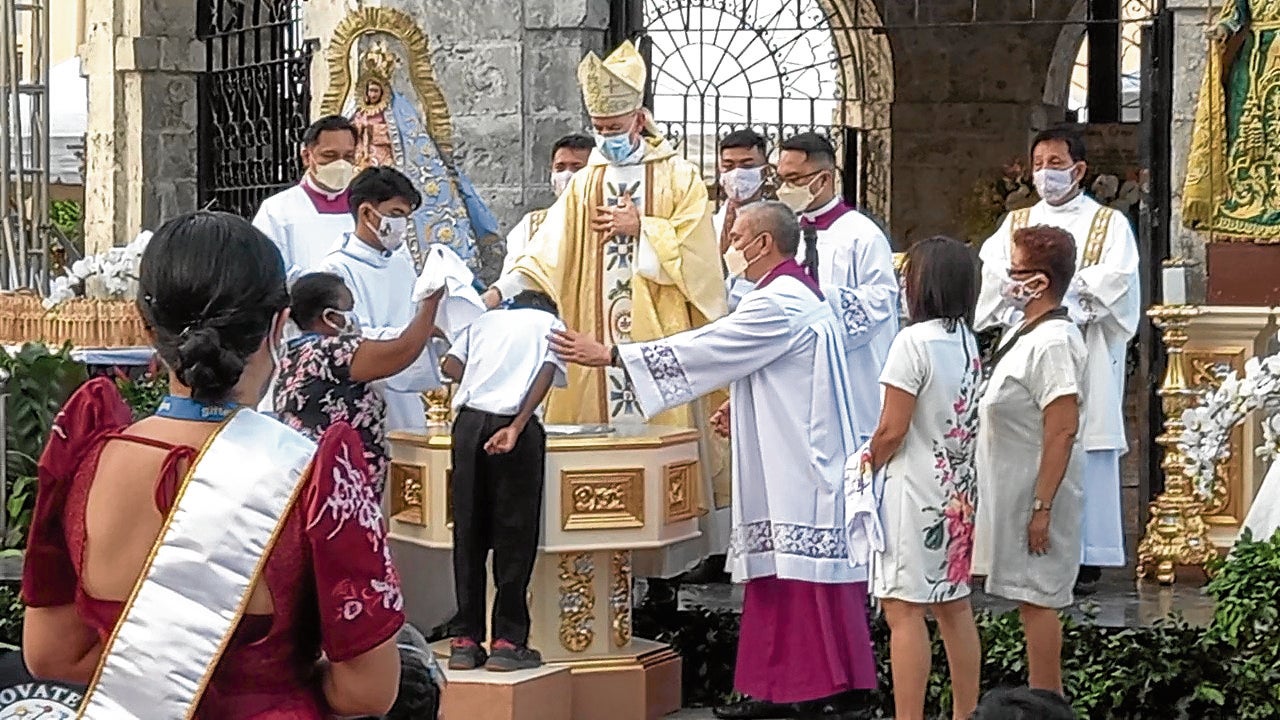 BAPTIZED Archbishop Charles Brown, papal nuncio to the Philippines, baptizes one of seven children during the Mass commemorating the first Catholic baptismin the country. —DALE ISRAEL

During the celebration, Brown baptized seven children, including a member of the indigenous peoples group Aeta.

Milby “Sam Milby” Elosendo, 13, was part of an Aeta tribe originally from Iloilo province who migrated with his family to the City of Naga in Cebu.

Milby said he was happy to be baptized as a Christian.

His stepmother Rosemarie said the boy was not baptized early because they were a nomadic tribe which transferred from one place to another.

The celebration was concluded with a short procession of the image of the Sto. Niño and a cross as people waved their hands in the air in unison while singing “Bato-Balani sa Gugma” (Magnet of love), an ancient hymn in honor of the Sto. Niño.

After the Mass, Basilica Minore del Sto. Niño de Cebu was declared a national cultural treasure by the National Museum of the Philippines. The original image of the Sto. Niño, which was given by Portuguese explorer Ferdinand Magellan to Cebu’s Queen Juana in 1521, is kept in the basilica.

According to journals by Antonio Pigafetta, the chronicler of the Magellan expedition, the first baptism in the country was officiated by Fr. Pedro de Valderrama, the fleet’s chaplain, on April 14, 1521.

About 800 natives, including Cebu’s chieftain Rajah Humabon and his wife Hara Humamay, were baptized that day. Humabon and Humamay, who received the Christian names Carlos and Juana, respectively, were the first to embrace Christianity in the Philippines.