WATCH: Teen with longest hair in the world gets it cut after 12 years | Inquirer News
Close
menu
search

WATCH: Teen with longest hair in the world gets it cut after 12 years 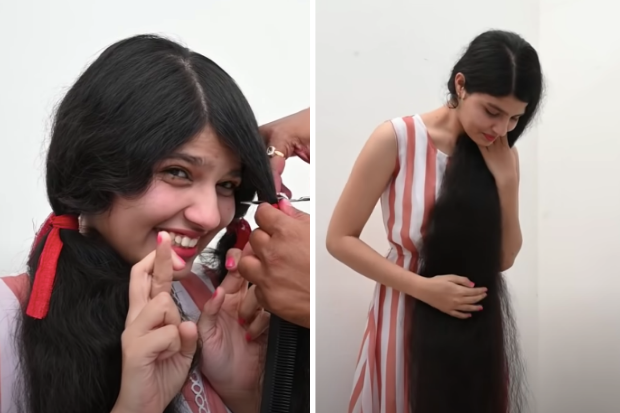 Nilanshi Patel, the teen with the longest hair ever in the world (Images: screengrab from YouTube/@Guinness World Records)

Dubbed the “Real-life Rapunzel,” a teenager with the longest hair in the world has finally gotten her first haircut after 12 years of growing it out.

Nilanshi Patel from India had been holding the Guinness World Records title for the “longest hair on a teenager” since 2018, when she was just 16 years old.

Her hair back then measured 170.5 centimeters (5 feet 7 inches) long. Last July, before her 18th birthday, her hair was measured once again and it turned out to be 200 cm (6 feet 6.7 inches) long, way taller if stood side by side a man of average height.

This final measuring also secured her another world record title: the “longest hair ever on a teenager,” which should not be confused with the other one. Patel has earned a total of three Guinness World Records titles over the 12 years of her growing out her hair.

When Patel finally decided to let go of her long locks, Guinness World Records also documented her journey of having her hair cut for the first time since she was 6 years old, which they shared on YouTube yesterday, April 14.

Although Patel achieved a feat that surpassed all her fellow teenagers, her story did not quite start as pleasant as it may seem; Patel having a bad experience with a hairdresser back when she was 6 years old was what forced her to stop getting haircuts from then on.

She then stuck by her decision for 12 years and started considering her hair her “lucky charm,” Guinness shared.

“My hair gave me a lot — because of my hair I am known as the ‘real-life Rapunzel’… now it’s time to give it something back,” Patel was quoted as saying.

After getting it cut, Patel considered three options of where it should end up: being auctioned off, being donated to charity or donated to a museum.

Patel ended up donating the hair to a museum, which inspired her mother Kaminiben to also donate her hair to charity.

After being cut, Patel’s hair weighed a total of 266 grams, according to Guinness. It will now be shipped to the United States to be displayed at Ripley’s Believe it or Not! Hollywood before then being displayed at Guinness World raRecords Museum.

While she was admittedly nervous about finally letting her hair go, Patel was ultimately happy with her new short hairstyle, as seen in Guinness’ video.  /ra