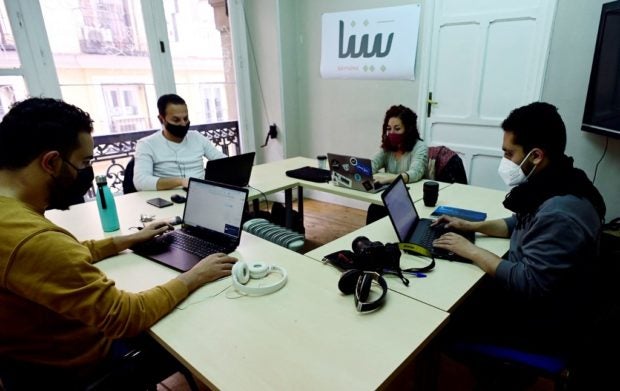 MADRID — Before arriving in Madrid, Muhammed, Ayham, Okba and Moussa honed their skills as journalists during Syria’s bloody civil war and now they have opened Spain’s first refugee-led digital magazine.

Launched on April 7, Baynana is an innovative online ‘magazine’ whose Arabic name means “Between us”.

All four are originally from the southern Syrian city of Deraa, birthplace of the 2011 revolt against President Bashar al-Assad that sparked the war.

In early 2019, they fled to Turkey, then in May that year, they flew to Madrid with the help of the Committee to Protect Journalists (CPJ), the New York-based press freedom watchdog.

“When the war started I was 12, but I knew very well what was going on because many people were out protesting — near my home, in the mosque,” says Okba Mohamed, the youngest of the four who is now 22.

Muhammed Subat, 31, told AFP he initially studied psychology in Damascus before going on to work for an Istanbul-based opposition channel called Syria TV, first in Syria, then in Turkey.

Spain was a place he had always wanted to visit because of the football, but he’d never imagined being there “as a refugee or migrant”.

“I imagined coming here as a traveller or as a student. But that’s life,” he shrugs.

With articles written in Arabic and Spanish, Baynana’s aim is to show “the good face of migrants here in Spain,” says Ayham al-Ghareeb, 32, who came to Madrid with his wife and two young daughters.

The fourth member of the team is Moussa al-Jamaat, 39, who also worked as a journalist in Syria and built and maintains the Baynana website.

So far, the focus has been on successful migrant stories, such as that of Ashraf Kachach, a YouTuber with Moroccan roots who fights Islamophobia, or Malak Zungi, the Lebanese founder of a project to train refugees as chefs in Spain.

Another report profiled Sevilla striker Youssef en-Nesyri, whose success in Spain’s top-flight football league incarnates the dreams of many youths in the Middle East and North Africa.

At the same time, Baynana seeks to provide “useful information” to Spain’s Arabic-speaking community, especially migrants who face many challenges in their daily lives.

“There is not a lot of information in Arabic on how to get your residency papers,” says Ghareeb, citing just one example.

It’s a problem they themselves have faced while they wait for their asylum claims to be processed.

According to the Spanish Commission for Refugee Aid (CEAR), more than 20,000 Syrians have sought refuge in Spain since 2011.

“I have been in Spain for nearly two years and I still can’t travel so I can’t see my family,” says Mohamed, whose relatives are refugees in Jordan.

Although life in Spain is “very safe”, there is “racism against migrants and refugees”, Ghareeb said, giving the example of problems trying to rent a flat.

A similar project already exists in Germany where 10 journalists from Afghanistan, Egypt, Iran and Syria write for a magazine called Amal, Berlin! which is Arabic for “Hope, Berlin!”.

Baynana’s potential audience within Spain — home to around one million Arabic speakers, mostly from Morocco — “is very broad”, says its Madrid-based editor Andrea Olea, who also translates into Spanish what her Syrian colleagues write.

And there is great diversity among Spain’s Arabic-speaking residents, who range from Moroccans “who come over to work on farms” to refugees with university degrees, she said.

Baynana’s staff share a modest office at the headquarters of Spanish foundation Por Causa which promotes investigative journalism about migration and is providing them logistical support.

Even so, funding for the project remains tight with the staff launching a crowd-funding campaign on social media.