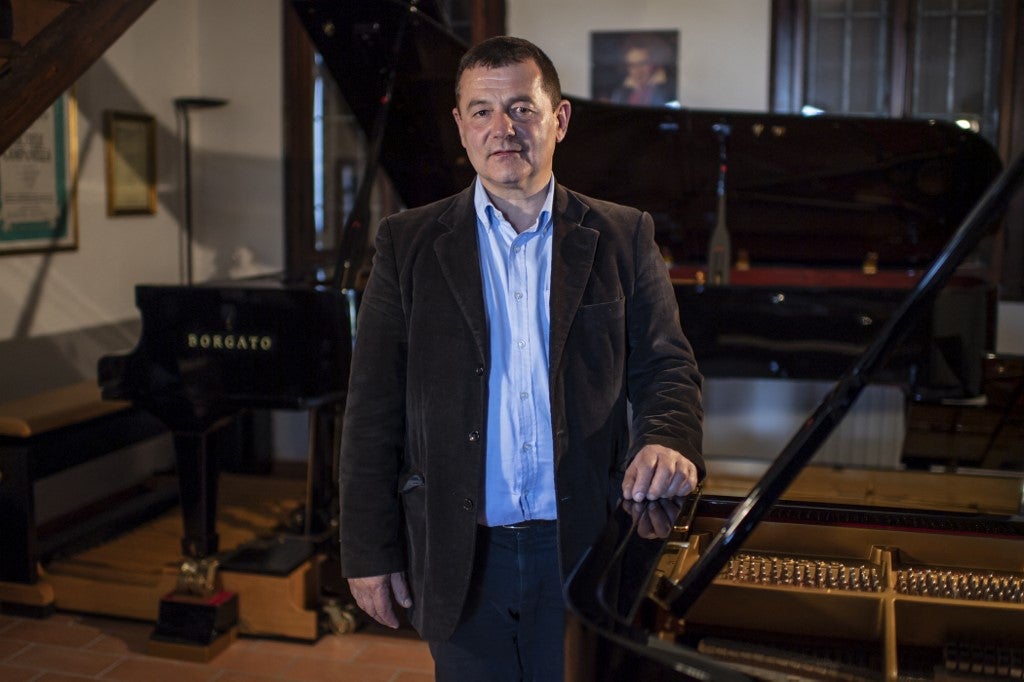 Italian piano craftsman Luigi Borgato poses in his workshop with the Doppio Borgato (Rear), an imposing assembly of two grand pianos on top of each other, with 37 pedals, in Borgo Veneto, near Padua on April 8, 2021. – Italian craftsman Luigi Borgato grew his business into a prestigious brand capable of attracting buyers from all over the world, until the coronavirus pandemic abruptly put a halt to it all. (Photo by MARCO BERTORELLO / AFP)

BORGO VENETO, Italy — At the age of 23, Luigi Borgato decided to build his first piano, for himself.

In the decades that ensued, the Italian craftsman grew his business into a prestigious brand capable of attracting buyers from all over the world — until the coronavirus pandemic abruptly put a halt to it all.

Now, the 58-year-old fears his ancient trade could disappear entirely in Italy, the country that invented the pianoforte at the end of the 17th century.

“Everything stopped, there are no more concerts, no more contacts with musicians. Without government assistance, our profession may not make it to the end of the pandemic,” Borgato told AFP.

Inside his home in Borgo Veneto, near Padua in northern Italy, everything breathes classical music — a bust of Verdi and a portrait of Beethoven hold court along with concert posters from such storied opera houses as La Scala in Milan.

At the back of the room sits the Doppio Borgato, an imposing assembly of two grand pianos on top of each other, with 37 pedals.

Halfway between an organ and a piano, the concept was borrowed from Mozart who had a pedal piano built in 1785.

When Borgato starts to play a Chopin prelude, he modestly smiles, murmuring that he should “study a little more”.

Nearby sits the latest addition to Borgato’s collection, introduced in 2017 by its inventor as “the longest concert piano in the world”, at 3.33 meters (10.9 feet), about 50 centimeters longer than the standard.

Borgato and his wife Paola, who is in charge of each instrument’s mechanics, build a maximum of two pianos per year, aided by a single employee.

“There is no one else in Italy, or even in the world making concert pianos by hand like we do,” said Borgato.

“But with the pandemic, people are thinking twice about investing in a piano.”

Buyers are mostly from abroad, from Switzerland, France, Germany, Austria but also China, and are generally piano players — although some invest in the instrument as a work of art.

Paola, 55, acknowledged the difficulty of saying goodbye to the handcrafted pianos.

“There is always a beautiful part of our life in each instrument that leaves,” she said.

Her husband lamented that Italy does not adequately recognize the craft of piano making, despite it being the country where Padua’s Bartolomeo Cristofori invented the piano’s ancestor, the pianoforte, in 1698.

Throughout Europe, small piano factories have gradually disappeared in favor of large companies, which in turn have been swallowed up by Asian giants.

Austrian manufacturer Boesendorfer, for example, has been owned by Japan’s Yamaha since 2008, while Germany’s Schimmel sold a majority stake to China’s Pearl River in 2016.

In his workshop, Borgato meticulously takes measurements, then cuts, molds and glues each part, from the soundboard in red spruce to the hammer heads covered with merino wool felt — at least 15,000 for a grand piano.

After starting his career as a tuner in 1983, he and his wife travelled the world to visit museums of musical instruments and study the history of the piano.

In 1985, driving an old Renault 4L, Borgato went to Berlin to visit his first piano factory, that of Bechstein.

It was also in Germany that he drew inspiration for his first piano, after visiting the house in Bonn where Ludwig van Beethoven was born in 1770.

Following the example of the German composer’s last instrument, he created a piano with four strings for the high notes instead of three, an idea he patented.

In 1991, the French virtuoso Jean Guillou, who died two years ago, inaugurated this piano in the Church of Saint-Eustache in Paris, referring to its “young genius piano maker”.

Since then, famous pianists such as Radu Lupu, Vladimir Ashkenazy or Jerome Rose have given recitals on Borgato pianos.

If the concerts have stopped due to coronavirus, the professional recordings continue.

During the lockdown last year, Italian pianist Francesco Libetta played all 35 sonatas of Beethoven on a Borgato, describing the sound of the 3.33-meter piano as “breathtakingly beautiful.”

“This piano is gigantic, but the sound that emanates from it is very supple, very nuanced, and allows you to go easily from pianissimo to fortissimo,” Libetta said.

“It’s like a great actor whispering and the back row of the house can hear it perfectly.”

Read Next
Over 162,000 Filipinos fully vaccinated vs COVID-19
EDITORS' PICK
PDP-Laban exec insists Pacquiao didn’t criticize Duterte on West PH Sea issue
Tired of your Wi-Fi signal problems at home? Here’s a solution!
No trees will be harmed in building of Nayong Pilipino vaccination hub – DOT
Get a chance to win 5G smartphones with Smart Signature Plans
Time to hurry up immunization before vaccines expire – Bayan Muna
Marian Rivera partners with JC to boost public health awareness
MOST READ
Sharon Cuneta flies to LA to take some time off: ‘I need to breathe, collect myself’
Esperon: ‘The master red-tagger is no other than Jose Maria Sison’
Sunshine Cruz condemns lewd posts on daughters anew: ‘Walang ginagawang masama ang pamilya ko’
Tiny Sandy Cay reveals the big lie
Don't miss out on the latest news and information.