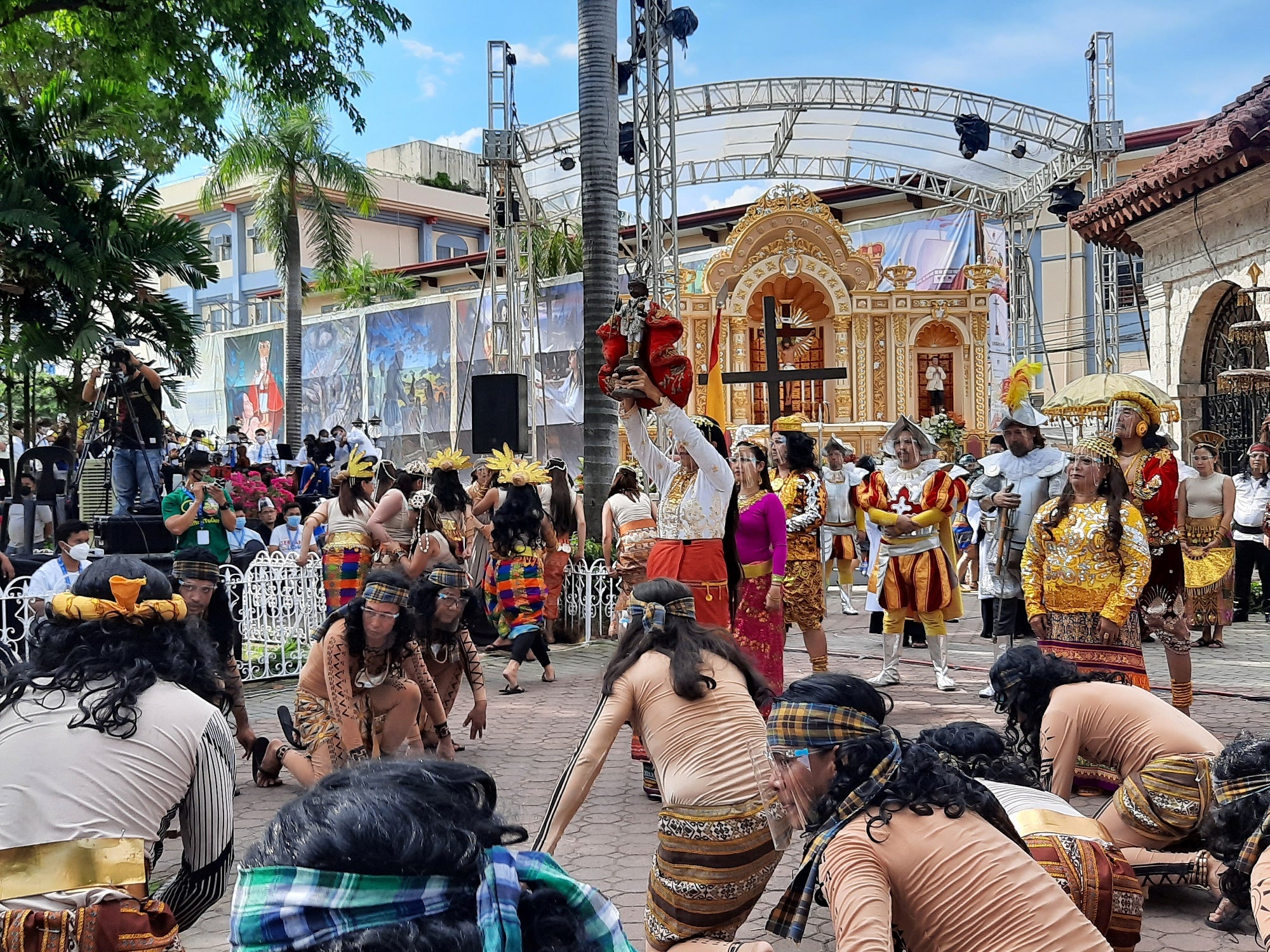 A reenactment of the first baptism in the Philippines was held at Plaza Sugbo where the Magellan’s Cross sits. PHOTO BY NESTLE SEMILLA

CEBU CITY—Filipinos play a key role in spreading Christianity to the world in the course of their employment as migrant workers, the representative of Pope Francis said on Wednesday (April 14) at the celebration of the 500th anniversary of the first baptism in the Philippines.

“Keep the flame of faith alive,” said Archbishop Charles Brown, papal nuncio to the Philippines and the Pope’s representative in the celebration.

Brown lauded Filipinos for accepting Christianity five centuries ago and sharing it with the world.

The Christian faith, he said, started in Asia where Jesus sent the Holy Spirit and summoned apostles to spread his mission of bringing people back to God.

The faith was brought to Europe and found its way in the Philippines.

“Now, Filipinos bring that faith to the world, not as explorers or colonizers, but in many cases as overseas Filipino workers,” Brown said.

“What we celebrate today is the beautiful light of Christ,” he said.

“Walk always as children of light. Keep the flame of faith alive so when the Lord comes, we go out to meet Him and enjoy the company of saints,” he added.

Brown said the roots of the Catholic faith have grown deep in the lives and culture of Filipinos and produced a distinct Filipino expression of universal truth.

In a message through video from Rome, Francis urged Filipinos to keep going and share the gift of faith they received 500 years ago.

“Continue to share the faith. You are not alone in the mission. You are accompanied by two Filipino saints—Lorenzo Ruiz and Pedro Calungsod,” he said.

“I don’t forget that. You are a generous people. Keep going. The Pope accompanies you. God bless the Philippines and may Mary and the Sto. Niño guide you always,” said the Church’s highest ranking official.

At least 700 guests were allowed at Plaza Sugbo where the kiosk housing Magellan’s Cross stood.

Health protocols were heeded with the people wearing face masks and shields and keeping safe distances from one another.

Before Mass, a reenactment of the first baptism on Philippine soil was held in the same venue.

During the celebration, Brown baptized seven individuals, including an Aeta.

The celebration was concluded with a short procession of the image of the Sto. Niño and cross as people waved their hands in the air in unison while singing “Bato-Balani sa Gugma (Magnet of Love)”, an ancient hymn in honor of Sto. Nino.

After Mass, Basilica Minore del Sto. Niño de Cebu Church and the original image of the Sto. Niño, which was given by Portuguese explorer Ferdinand Magellan to Cebu’s Queen Juana on April 14, 1521, were declared “national cultural treasures” by the National Museum of the Philippines.

The Catholic Bishops’ Conference of the Philippines (CBCP) was represented by its secretary general, Msgr. Bernardo Pantin.

Due to restrictions brought by the COVID-19 pandemic, most people watched the event through online portals.

According to Antonio Pigafetta, the chronicler of the Magellan expedition, the first baptism in the country was performed by Fr. Pedro Valderama, the chaplain of the expedition, on April 14, 1521.

At least 800 natives, including Cebu chieftain Rajah Humabon and his wife Hara Humamay, were baptized that day. Humabon and Humamay, who received the Christian names Carlos and Juana, were the first to embrace Christianity in the Philippines.

Juana was received from Magellan the image of the Sto. Niño which the queen kept in place of her idols.