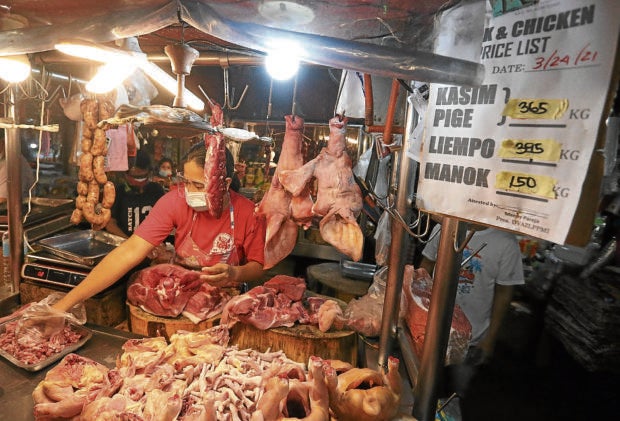 LUXURY For the poor and daily wage earners, having pork on their table is considered a luxury due to rising meat prices. At a wet market in Las Piñas City, prime cuts of pork are sold for at least P365 a kilo. — MARIANNE BERMUDEZ

MANILA, Philippines — Seventeen lawmakers in the House of Representatives are pushing for the termination of an executive order mandating the temporary reduction of tariffs on pork imports amid the insufficient supply of pork in the country.

The lawmakers filed the House joint resolution to call for the withdrawal of Executive No. 128 which was recently signed by President Rodrigo Duterte in a bid to resolve the dwindling supply problem and soaring prices due to continuous demand. The lawmakers also called for the rejection of the “staggering expansion” of the minimum access volume (MAV) for pork imports.

“Tariff reduction on pork imports will automatically foster increased importation of pork products at the expense of local hog raisers and producers, who are seeking much-needed indemnification and assistance amid the damaging impact of the African Swine Fever (ASF) that continues to plague the country since Juy 2019,” the lawmakers said.

“Tariff reduction and increased MAV of pork imports will further decimate the local pork industry as we know it and will also undermine our local production and food security, as what has happened to the rice industry,” they added.

The lawmakers likewise pointed out that the “impending production stoppage of many producers who cannot cope with the negative effects of the reduced tariff and MAV expansion” will mean more loss of jobs and livelihood.

“It is not an assurance that reduced tariffs and increased importation will stabilize or reduce the current high prices of pork meat products which have become unfairly exorbitant for consumers,” the lawmakers said.

Instead, the lawmakers said, the national government should implement more effective and long-term solutions to strengthen and address the repopulation and rehabilitation of the local pork industry.

“EO 128 would create irreparable damage to the pork industry and to the agricultural sector as a whole. EO 128 runs contrary to the promotion of the general welfare of the people which is a fundamental principle in our Constitution,” the lawmakers said.

“By this reason alone, EO 128 must be withdrawn and terminated immediately,” they added.

Earlier at the Senate, three senators are also pushing for the passage of a joint resolution of Congress to revoke EO No. 128.

Read Next
DOH explains Galvez’s ‘taken out of context’ remark on COVID-19 surge
EDITORS' PICK
Alex Eala wins Grand Slam on Independence Day: ‘I hope I made my contribution to the country’
Ahead of ONE: Full Blast II, Mongkolpetch warns Elias Mahmoudi: ‘Watch out for my fists’
Rare earth metals at the heart of China’s rivalry with US, Europe
PNP, PDEA destroy P25.8M worth of marijuana in Kalinga
G7 rivals China with grand infrastructure plan
Kai Sotto continues to inspire Filipinos by sharing his passions and stories with Smart Prepaid
MOST READ
Chel Diokno, Bro. Eddie, Ate Vi decline 1Sambayan 2022 poll nomination
1Sambayan names 6 choices to pit vs Duterte’s anointed in 2022
Groups slam Duterte ‘surrender’ to China
G7 rivals China with grand infrastructure plan
Don't miss out on the latest news and information.