Distribution of P1,000 cash aid in Bulacan only 2.5-percent complete 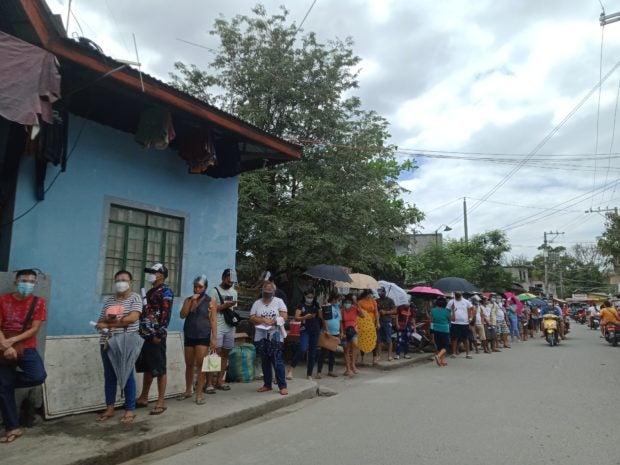 Residents of Barangay Malis in Guiguinto town, Bulacan province endure the heat as they line up to receive the P1,000 cash emergency fund from the national government that was intended for areas within the NCR Plus Bubble that was previously placed on enhanced community quarantine. Photo by Carmela Reyes-Estrope

CITY OF MALOLOS –– The distribution of the P1,000 cash aid to almost three million residents in Bulacan province could be completed by May 6, officials said.

As of Tuesday, April 13, only 2.5 percent of the total P2.9 billion financial assistance allotted for the province had been given to beneficiaries.

Reiner Grospe, information officer of the Department of Social Welfare and Development in Central Luzon, said some of the list of beneficiaries in various towns have yet to be completed.

Among the first to receive the cash aid were 33,797 residents from 10,316 families in the towns of Bocaue, Bustos, Donya Remedios Trinidad (DRT), Marilao, Norzagaray, Plaridel, Pulilan, San Miguel, and Obando, and the cities of Meycauayan and San Jose del Monte.

Bulacan, along with Metro Manila and the provinces of Laguna, Cavite and Rizal, were placed on a two-week enhanced community quarantine (ECQ) that began on March 28 due to rising cases of the coronavirus disease (COVID-19).

Bulacan and these areas had reverted to the less stringent modified enhanced community quarantine.

Budget Secretary Wendel Avisado released the budget for the cash aid through the Local Budget Circular No. 136 dated March 30.

This after President Duterte approved a P1,000-worth of in-kind or cash aid per person affected by the lockdown.

Some 22.9 million beneficiaries from these areas are expected to receive aid from the government.

Several members of a family can each receive the ECQ aid, but a family with more than three members would be given only a maximum of P4,000.