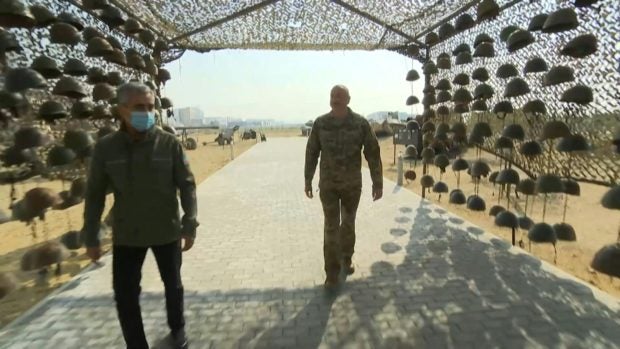 YEREVAN — Armenia on Tuesday accused its historic rival Azerbaijan of fomenting ethnic hatred by displaying helmets of Armenian soldiers killed during the war between the neighboring countries last year.

A decades-long conflict over the disputed Nagorno-Karabakh region erupted into all-out war in September, killing more than 6,000 people.

Six weeks of fighting ended in November with Armenia’s defeat. Yerevan ceded swathes of territories to Baku under a Russian-backed ceasefire, which was seen in Armenia as a national humiliation.

“Everyone who visits the park of military trophies will see the strength of our army, will see our willpower, and how hard it was to achieve victory,” Aliyev said in a video address published on his website.

Hundreds of helmets of Armenian soldiers killed in the war were displayed in the park in central Baku as well as wax mannequins of Armenian troops.

The park, due to be opened to the public shortly, sparked uproar in Armenia, with the country’s foreign ministry accusing Azerbaijan of “publicly degrading the memory of the victims of the war, missing persons and prisoners of war, and violating the rights and dignity of their families.”

“Azerbaijan is finally consolidating its position as a global center of intolerance and xenophobia,” the ministry said in a statement.

This sentiment was shared by most people in the Armenian capital Yerevan.

Mass anti-government protests have been regularly held in Yerevan against Prime Minister Nikol Pashinyan’s decision to agree to the humiliating truce, leading him to call snap polls in June.

The park “recalls evidence of Hitler’s barbarism that is exhibited in museums around the world,” he said.

Azerbaijan’s foreign ministry dismissed Armenia’s criticism of the park as a “campaign of lies and slander against Azerbaijan.”

“The message of the park and the exhibits displayed here is unambiguous: Victory is the triumph of international law over illegal occupation and the policy of aggression,” the ministry said in a statement.

Ethnic Armenian separatists declared independence for Azerbaijan’s Nagorno-Karabakh region and seized control of the mountainous enclave in a brutal war in the 1990s that left tens of thousands dead and forced hundreds of thousands from their homes.

Azerbaijan and Armenia have traded accusations of war crimes after the conflict — which had been largely dormant for decades — re-ignited in September.

For Azerbaijanis displaced by war, a chance to finally go home