Storm outside PAR strengthens; may intensify into typhoon by weekend 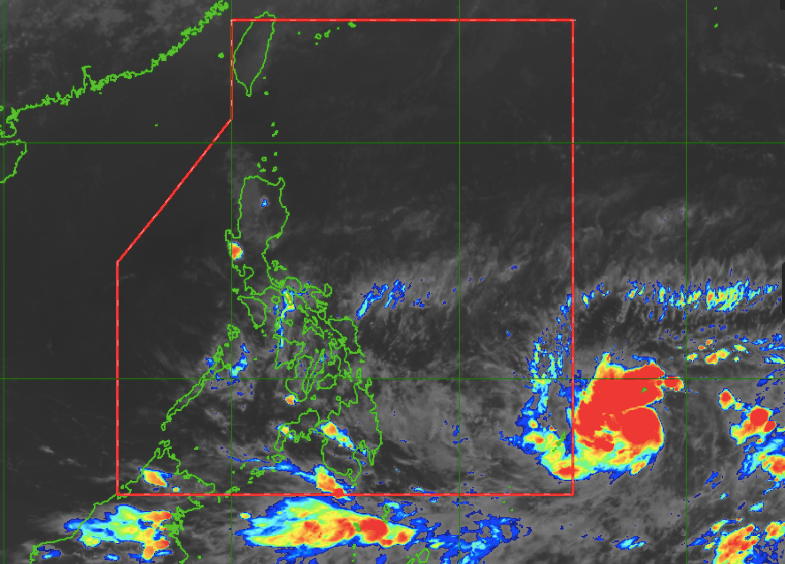 State weather forecasters ssay that the tropical depression outside the Philippines’ area of responsibility will strengthen into a typhoon by this weekend. From Himawari IR1 via Pagasa

MANILA, Philippines — The tropical depression outside the Philippines’ area of responsibility strengthened on Tuesday, with state weather meteorologists predicting that it will become a typhoon by the weekend.

It had maximum sustained winds of 55 kilometers per hour (kph) and gustiness of up to 70 kph.  It is moving west at a speed of 20 kph.

Even though it is currently moving westward, Pagasa said that it is likely to move to the north by Wednesday, by which time it would have become a tropical storm.

After Wednesday afternoon, it may move northeast and become a severe tropical storm by Friday afternoon.  Between Friday night and Saturday afternoon, it would enter PAR — located east of Eastern Visayas or Dinagat Islands — as a typhoon.

(We expect that before the cyclone enters the Philippine area of responsibility, it has already reached typhoon intensity.  Its entry inside the PAR is expected between Friday night or Saturday morning.)

However, Pagasa’s forecast track still doesn’t anticipate landfall since the disturbance could just move east of Bicol Region’s waters before heading back to the Pacific Ocean. The state weather bureau assured the public it would continue monitoring the storm’s developments.

Pagasa also asked people, especially those living in the country’s eastern area, to stay tuned for updates as projections may change in the coming days.

(Generally, after entering PAR, it would move northeast, and Pagasa would give the local name “Bising.”  As of now, there is still a low chance that the storm makes landfall or hits land because, based on our forecast models, it would recurve or turn back towards the Pacific Ocean.)

But in the meantime, easterlies or warm winds from the Pacific Ocean would still prevail, giving a huge part of the country warm and humid weather.  Pagasa noted that isolated rains may still occur due to the high moisture content brought by the easterlies.

Pagasa said that no gale warning had been raised now, but sea condition over the eastern side of Luzon and Visayas would be moderate, while the rest of the country’s seas would be slight to moderate.