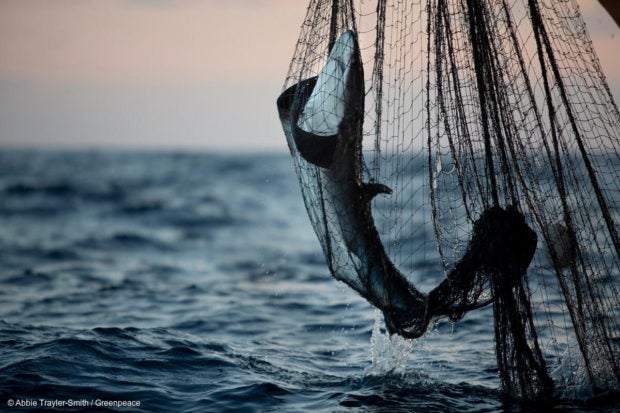 A shark is hauled in by crew onboard an Iranian flagged fishing vessel in the Northern Indian Ocean February 19, 2021. Picture taken February 19, 2021. Abbie Trayler-Smith/Greenpeace/Handout via REUTERS THIS IMAGE HAS BEEN SUPPLIED BY A THIRD PARTY. FOR EDITORIAL USE ONLY, NOT FOR MARKETING OR ADVERTISING CAMPAIGNS. NO RESALES. NO ARCHIVES. MANDATORY CREDIT.

NAIROBI — Greenpeace has uncovered widespread use of illegal driftnets in the northwest Indian Ocean, which it says are decimating marine life in what is one of the world’s most ecologically vulnerable fishing grounds.

During two weeks at sea, the environmental organization says it filmed seven ships within 20 square miles (50 sq km) using driftnets to catch tuna. It detected another eight vessels on radar using navigational patterns that also suggested the use of nets.

“If yellowfin tuna continues to decrease at the current rate then food security in the region, as well as local economies [are] going to take a huge hit,” Greenpeace said.

Nicknamed the “walls of death” for the quantity of other sea life they catch in addition to the fish they are set for, the nets were banned by the United Nations 30 years ago. 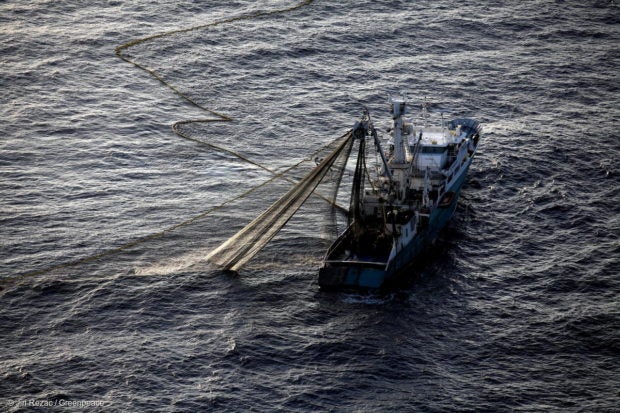 French purse seiner vessel Trevignon hauls a catch of skipjack and yellowfin tuna associated with a Fish Aggregating Device (FAD) in the Mozambique Channel, April 15, 2013. Picture taken April 15, 2013. Jiri Rezac/Greenpeace/Handout via REUTERS THIS IMAGE HAS BEEN SUPPLIED BY A THIRD PARTY. FOR EDITORIAL USE ONLY, NOT FOR MARKETING OR ADVERTISING CAMPAIGNS. NO RESALES. NO ARCHIVES. MANDATORY CREDIT.

Greenpeace shared the footage with Reuters of sharks and manta rays that had been killed in the nets, set some 500 miles (800 km) east of Somalia. “Because of the issues of bycatch we’re concerned about all fish in the Indian Ocean,” it said, adding that the same area had also seen a huge increase in unregulated squid fishing.

“What’s the point in a U.N. ban on driftnets when all the fishing vessels we saw are using driftnets?” asked Will McCallum, head of oceans for Greenpeace UK, in comments to Reuters.

“There is little to no enforcement in international waters… We need a global ocean treaty … to resolve this enormous governance gap.”

Nations are due to meet in August for negotiations over such a pact, designed to attempt to set up safeguards for parts of the ocean similar to reserves established on land.

Last month, representatives of 30 nations met to discuss ways to save fast-depleting tuna stocks in the Indian Ocean. The meeting ended without any new agreement.