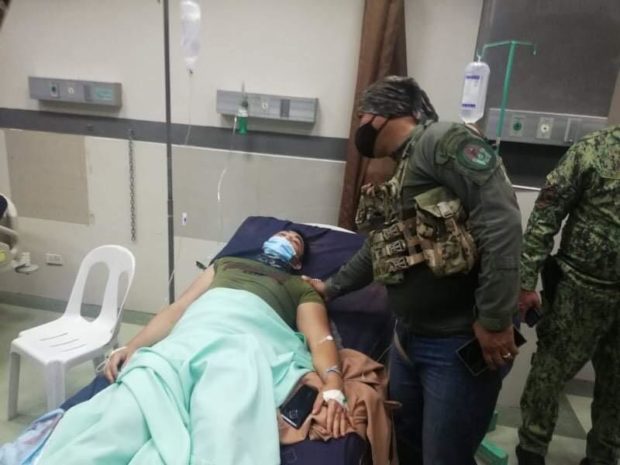 This photo shows one of the wounded authorities from the PNP/Army shootout with BI-ISIS sub-leader, Abu Asraf, in Marawi City on Monday, April 12, 2021. Photo from PNP-PIO

MANILA, Philippines —  One of the leaders of the ISIS-inspired terrorist group Daulah Islamiyah (DI-ISIS) was killed in a shootout with police officers and soldiers in Marawi City, Lanao del Sur, on Monday.

“The police operatives in coordination with our AFP counterparts are continuously conducting manhunt operations to arrest other members of this terrorist group,” Sinas said.

Asraf is the subject of a warrant of arrest in three criminal cases for murder and frustrated murder that was issued by Malabang, Lanao del Sur Regional Trial Court Branch 12.

According to Sinas, the suspect along with several unidentified male companions engaged in a 30-minute shootout with government troops that left seven PNP personnel and one Army officer wounded.

The eight wounded authorities were rushed to the nearest hospital in Marawi City for treatment.

Asraf and his wife identified as Khalil Mufliha were discovered injured after the encounter and were immediately brought to the Amai Pakpak Medical Center.

Asraf, however, was declared dead on arrival by the attending physician.