No mood to celebrate: Myanmar to snub water fight festival 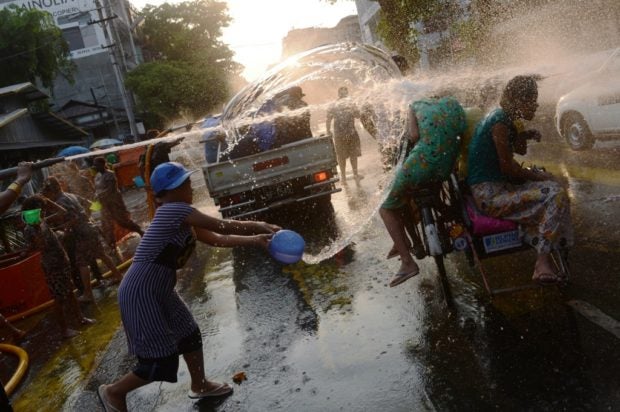 In this file photo taken on April 13, 2016, children take part in celebrations marking Thingyan, a water festival which brings in the country’s new year, in Yangon. Instead of the usual water pistols, splashing and jubilant crowds during Myanmar’s New Year festival of Thingyan — the holiday in 2021 will see real guns, blood on the streets and grief over a democracy robbed. Photo by STR / AFP

YANGON — Instead of the usual water pistols, splashing and jubilant crowds during Myanmar’s New Year festival of Thingyan, this year’s holiday will see real guns, blood on the streets and grief over a democracy robbed.

For a second year running, Myanmar’s traditional Buddhist holiday period, which runs from Tuesday to Friday this week, has been disrupted.

But the February 1 military coup which ousted civilian leader Aung San Suu Kyi from power, and a subsequent security crackdown that has claimed more than 700 lives, has darkened the mood in 2021.

“The Thingyan period is the happiest moment of all Myanmar people. It is the hottest time in Myanmar, but the people aren’t hot because we play in the water and everybody is free of stress,” said Nyi Nyi Lwin, whose name has been changed because of the danger of arrest for speaking to foreign media.

“We can’t enjoy it like we normally would during this dark time.”

Public water fights are part of a cleansing ritual to welcome in the Buddhist new year and are also held in Thailand, Cambodia and Laos.

“Our hopes have been destroyed by this coup. Myanmar people won’t be happy because of hundreds dying and thousands being detained. How can we be happy?” Nyi Nyi Lwin said.

Myanmar anti-coup protesters have called for a boycott of junta-organized Thingyan festivities.

“There is no reason to participate in any celebration until democracy is achieved,” one Facebook user said.

“Participating in the Thingyan festival is disrespectful to the arrested elders, citizens and fallen martyr heroes,” another user said.

At Nyaung-U town in the Mandalay region, activists attached yellow notices to the heads of statues of dancing courtiers from the Bagan period, urging people not to participate in the water festival.

In Mon state, some residents expressed concern that celebrating the festival and having fun would show disrespect to ethnic minorities who have been displaced because of the security force attacks.

The junta appears to be promoting the tradition but it is not clear whether public events will go ahead.

Authorities had set up festival stages in Mandalay and Naypyidaw a fortnight ago but then days later they were pulled down.

“Thingyan is not just a festival. It is an excellent chance for the people to (wash) their souls during the Maha Thingyan festival. They think water can wash all evil deeds. It is one of the traditional thoughts of Myanmar,” state-run newspaper New Light of Myanmar reported this week.

One 30-year-old activist said he planned to focus on protesting during Thingyan this year — reciting satirical poetry, making protest art and marching in the streets.

“We will create our own revolutionary Thingyan as a non-festive Thingyan — not a fun Thingyan,” he told AFP.