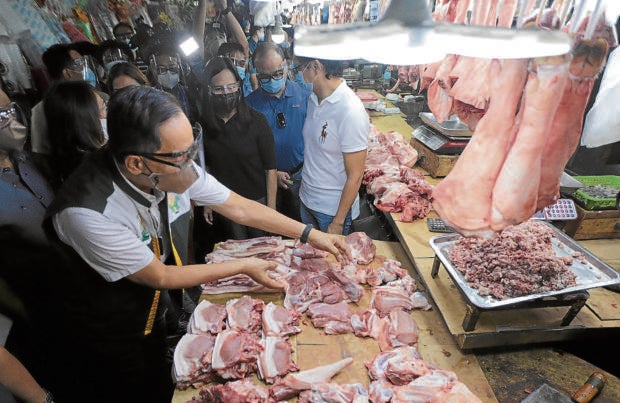 MANILA, Philippines — Some senators on Monday scored the Department of Agriculture (DA) for its “out of range” projection of the country’s pork supply deficit for 2021, which led to its recommendation to lower tariffs on imported pork and to increase the allowed volume of imports to the country.

During the Senate investigation into the food security crisis brought about by the African swine fever (ASF), Senator Cynthia Villar lamented the recommendation of the DA to President Rodrigo Duterte to increase the minimum access volume (MAV) by 350,000 metric tons on top of the current 54,210 MT.

(I can’t understand your computation. It’s so out of range. Totally out of range. Don’t you pity our backyard farmers? Sixty-five percent are hog raisers, they are the poor farmers of the Philippines. They are at the losing end here.)

The senator, chairman of the Senate agriculture committee, pointed out that data from the Bureau of Customs (BOC) showed that in the last 10 years, the highest volume of imported pork meat was at 120,000 metric tons (MT) in 2018.

Even with the projected 25-percent reduction in local pork meat production in the Philippines due to the ASF outbreak, Villar said the projected demand would still be far from the DA’s recommended MAV increase.

In trying to defend the DA’s recommendation, Agriculture Secretary William Dar cited data from the Philippine Statistics Authority (PSA) that the demand for pork in the country is 15 kilograms per person.

According to Dar, the deficit of pork supply this year is projected to be 388,563 MT with the local production of meat seen at 1.22 million MT as opposed to the demand of 1.6 million.

Senate President Vicente Sotto III, however, interjected and pointed out that there are also a lot of Filipinos who do not eat pork.

(Senators are alarmed because massive importation will ruin the whole hog industry.)

(This seems excessive. Sen. Villar is right. Our importation should not be this big, from history, at the most as Sen. Villar said it is 150,000 MT. You are recommending more than double.)

The President last week signed Executive Order No. 128 temporarily reducing tariffs on pork imports in a bid to resolve the country’s undersupply of pork.

Aside from this, the President also recently recommended, in a letter to Congress, an increase in MAV by 350,000 MT in addition to the current 54,210.