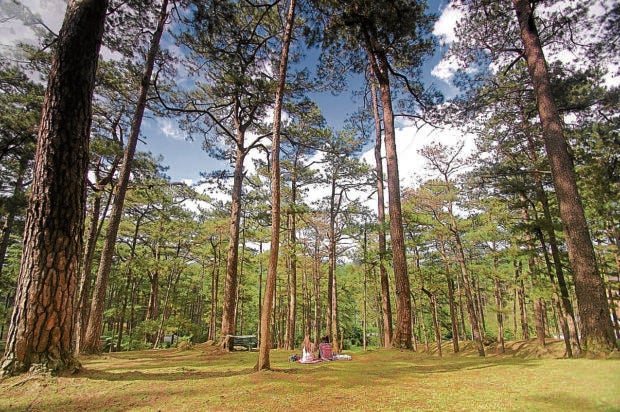 ENDURING This area surrounded by pine trees at Camp John Hay in this 2012 photograph used to be frequented by Baguio residents before the pandemic struck. John Hay hosts one of the biggest clusters of pine cover remaining in Baguio City. —RICHARD BALONGLONG

BAGUIO CITY, Benguet, Philippines — Over 900 hectares of land in the city have been marked as tree zones and will require city council protection to preserve and rebuild the city’s remaining green cover, the legislative research unit of the city council said.

Apart from 14 protected watersheds spanning 77 ha and 61 ha of parks and tree plazas, the research team listed idle village lots, school grounds and properties not suited for settlements as areas fit for the reforestation program.

The city council has previously backed a 21-year forest management plan (2022-2043) that will regrow new pine trees to replace the casualties of overdevelopment and overcrowding.

The summer capital has 2.5 million trees, which is insufficient for Baguio’s current population of 370,000, according to a 2019 inventory ordered by Environment Secretary Roy Cimatu. Only 500,000 of these trees are Benguet pines.

The research team’s report submitted to Vice Mayor Faustino Olowan on March 30 indicated that 18 ha of private parks, 2 ha of open areas in local campuses, 15 ha of barangay land and 42 ha of land in government reservations could accommodate new forests. The land use inventories were provided by city environment officer Rhenan Diwas and city planning and development coordinator Donna Tabangin.

Late last year, the council also discussed measures for buying private lands that would be reclassified into tree parks or provide tax incentives for landowners who maintain large clusters of trees in their properties.

Buying back small forests will help protect Baguio’s remaining “safe spaces” and stave off the city’s urban decay, Tabangin said in a meeting with other city officials in September last year.

The carrying capacity study of Baguio resources that was undertaken by data consultancy group Certeza Infosystems showed that the city’s ideal urban forest cover should be 30 to 40 percent of its land area. But its present forest cover represents only 23 percent of the territory.

Increasing the city’s tree cover would also solve the city’s warming temperature, according to Diwas.

In 2016, a heat index of 29 degrees Centigrade that was measured in April became the warmest recorded day in Baguio, the country’s coldest city.

Diwas, in an earlier city managers meeting, said areas that have become dense with buildings “have become warmer compared to the surrounding rural areas when in fact we are at a higher elevation.”

To bring back the cold for which Baguio is known, the forest management program will put up tree parks in strategic areas where the heat index is high, he said.

Diwas said ornamental trees would be grown in parks and pocket lots designated as “green spaces” around buildings.

“Storm water tree pits,” or trees that would line small city streets would also be developed,” he said.

Because of the “urban heat island effect,” Baguio hot spots were first detected in 1998, Diwas said, citing a heat index study conducted by the University of the Cordillera. According to the same study, the hot spots have since permeated all of Baguio in 2019.

The council is also deliberating on a proposal to impose a five-year moratorium on all tree cutting activities.