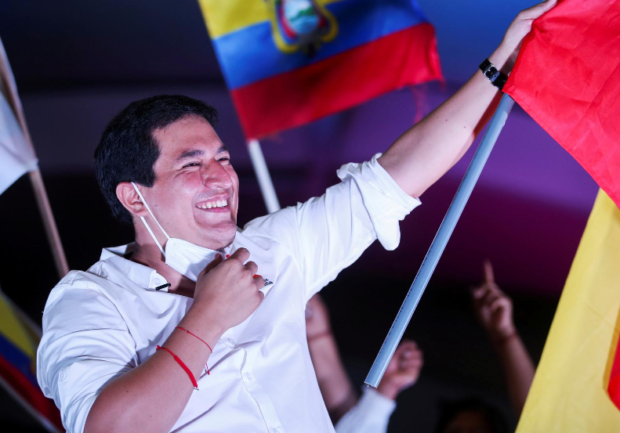 QUITO — Ecuadoreans will vote in a presidential runoff on Sunday to decide whether to maintain the pro-market policies of the last four years or return to the socialism of the preceding decade as the Andean country seeks to revive its stagnant economy.

Left-wing economist Andres Arauz won the first round of the election in February, garnering almost 33% of the vote, on promises of generous cash handouts and a resumption of the socialist policies of his mentor, former President Rafael Correa.

Arauz’s rival, banker and third-time presidential candidate Guillermo Lasso, is promising to create jobs through foreign investment and financial support for the agricultural sector. Lasso won just shy of 20% of the first-round ballots.

Indigenous activist Yaku Perez, who narrowly lost out to Lasso for a slot in the runoff, is calling on supporters to spoil their ballots to protest what he called electoral fraud during the first round.

The vote will hinge on the roughly 15% of the electorate who remain undecided, said Francis Romero, director of pollster Click Report, describing the figure as unusually high.

“(The undecided) see that neither option has the capacity to get the country out of the economic and health crises that it’s in,” said Romero.

The oil-exporting nation’s economy was already weak due to low crude prices when the coronavirus outbreak started. The pandemic has pushed a third of the population into poverty and left half a million people unemployed.

President Lenin Moreno, who is not seeking re-election, imposed painful austerity measures as part of a $6.5 billion financing agreement with the International Monetary Fund, but was unable to kick-start the economy.

The elections council expects to report the results on Sunday night. The new president will take office on May 24.

Arauz, 36, has offered to give $1,000 to a million families as soon as he takes office, as well as provide benefits to young people such as free internet access.

His plans are being closely watched by foreign investors who hold Ecuadorean bonds, some of whom have expressed concerns about heavy spending plans in the face of the government’s delicate finances.

Lasso has tried to soften his conservative image by promising to fight discrimination on the basis of sexual orientation and boost protection of animal rights.

Both candidates are calling on supporters to “take care of the votes” and denounce irregularities on voting day and during the vote tallying process.