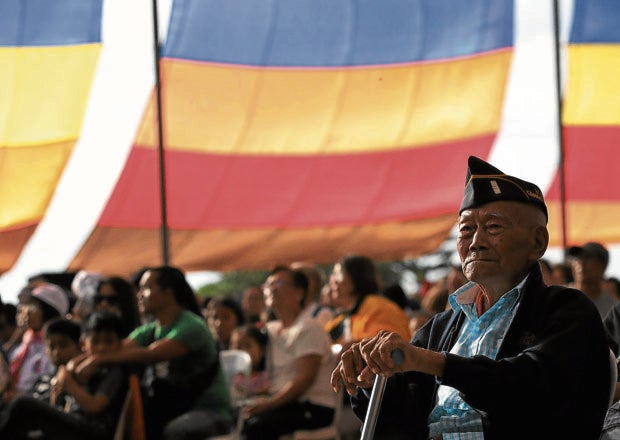 MANILA, Philippines — Despite being a minority today among the country’s veterans, former soldiers and guerrillas who fought in World War II continue to be provided state support, which now also seeks to ensure their protection from a threat that was totally alien to them in their prime — the coronavirus pandemic.

Of the 151,824 Filipinos who fought in the Pacific theater of the war, only 2,952 remained as the nation marked Araw ng Kagitingan—Day of Valor—in their honor on Friday.

Remarkably, 279 of the surviving veterans have made it past a century. The oldest among them, retired Sgt. Malomalo Salag, turned 112 on Valentine’s Day. When the first Japanese bombs fell on Philippine soil, Salag was already 32.

According to the Philippine Veterans Affairs Office (PVAO), there are 38 octogenarians among the veterans and the rest are nonagenarians.

The threat now faced by these comorbid seniors has also been likened to a war and may well be just as historically significant as the conflict they took part in.

Defense Undersecretary Ernesto Carolina, who heads the PVAO, said his agency aims to “protect them further” from the COVID-19 pandemic.

“They’re very vulnerable to COVID-19, which may be fatal for them due to their very old age. So we increased the capability of our online platforms so they do not need to physically go to the PVAO office in Camp Aguinaldo, Quezon City,” he said in a phone interview.

With the help of their relatives, veterans may now contact PVAO via Skype or Viber video calls.

PVAO is also arranging a partnership with a courier service for the delivery of their pensions.

Carolina said: “We are with them in pushing for an increase in the pensions and benefits they receive.”

“What our war veterans want is some form of recognition of what they did for our country, which they rightfully deserve,” he said.

According to Carolina, the PVAO is pressing Congress to increase the disability pension for veterans from P1,700 to P10,000.

Last year, the House of Representatives passed its bill increasing the disability pension to P4,500.

President Duterte himself has taken up the welfare of veterans—enacting Republic Act No. 11164 in 2018, which increased their monthly pension from P5,000 to P20,000.

But this is not enough. “Senior veterans complained to us that most of their already measly pension just [go] to … their hospitalization and medicine,” Carolina said.

“We are eyeing that the government fully subsidize all of their medicine and hospital expenses, and their pensions remain intact for their families’ other expenses,” he added.

Carolina further pointed out that Veterans Memorial Medical Center (VMMC) in Quezon City remains the only dedicated hospital for the veterans.

Under the PVAO’s Veterans Hospitalization and Medical Care Program (VHMCP), veterans are reimbursed 100 percent of their hospitalization and medical expenses while admitted at VMMC and in other hospitals accredited by the Philippine Health Insurance Corp.

Carolina said that from last year’s P100 million, VHMCP’s budget was increased to P200 million in 2021. PVAO is also aiming to get an approved budget of P300 to P350 million for 2022, to ensure that more veterans would be provided care.

The agency also plans to set up veterans wards at Vicente Sotto Memorial Medical Center in Cebu City and in hospitals in Dagupan City and Batangas City in Luzon.

“We do not want our veterans, especially our war veterans from the provinces, to travel all the way to Quezon City to get medical attention. They are not second-class citizens, they deserve priority service just like how veterans are treated in other countries,” Carolina said.

For now, he is relieved that no veteran has been counted among the pandemic’s casualties.“The adage ‘what doesn’t kill you makes you stronger’ applies to our war veterans. They are living long and surviving the pandemic,” Carolina said.

He said the PVAO continues to provide essentials such as masks, alcohol and grocery packs.

Carolina also cited the solidarity among the veterans as they help out each other.

He noted with pride that “when lockdowns came and some people got financial assistance from the government, our war veterans have their own ‘ayuda’ from the veterans organizations in their localities.”