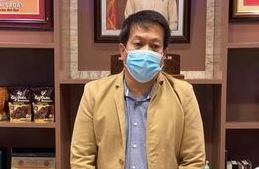 DIGOS CITY—The city information office here has announced that Mayor Josef Fortich Cagas was found positive for SARS-CoV2, the virus that causes COVID-19, on April 9 after undergoing a test.

Cagas is now on isolation and treatment in a hospital, the official statement said.

The Epidemiology Surveillance Unit of the City Health Office is currently doing contact tracing to people who have been in close contact with the mayor.

The local government has urged those whom Cagas met starting March 17 to contact health authorities so they can be assessed for symptoms of possible infection.

The health officials further asked those with cough, fever and body pains to immediately visit their office.

The local government said it will undertake the financial costs of having the mayor’s contacts undergo COVID-19 testing.

City Councilor Salvador Dumogho III, who was frequently accompanying Cagas, had tested negative for the virus.

As of Friday, Digos City has 41 active cases.