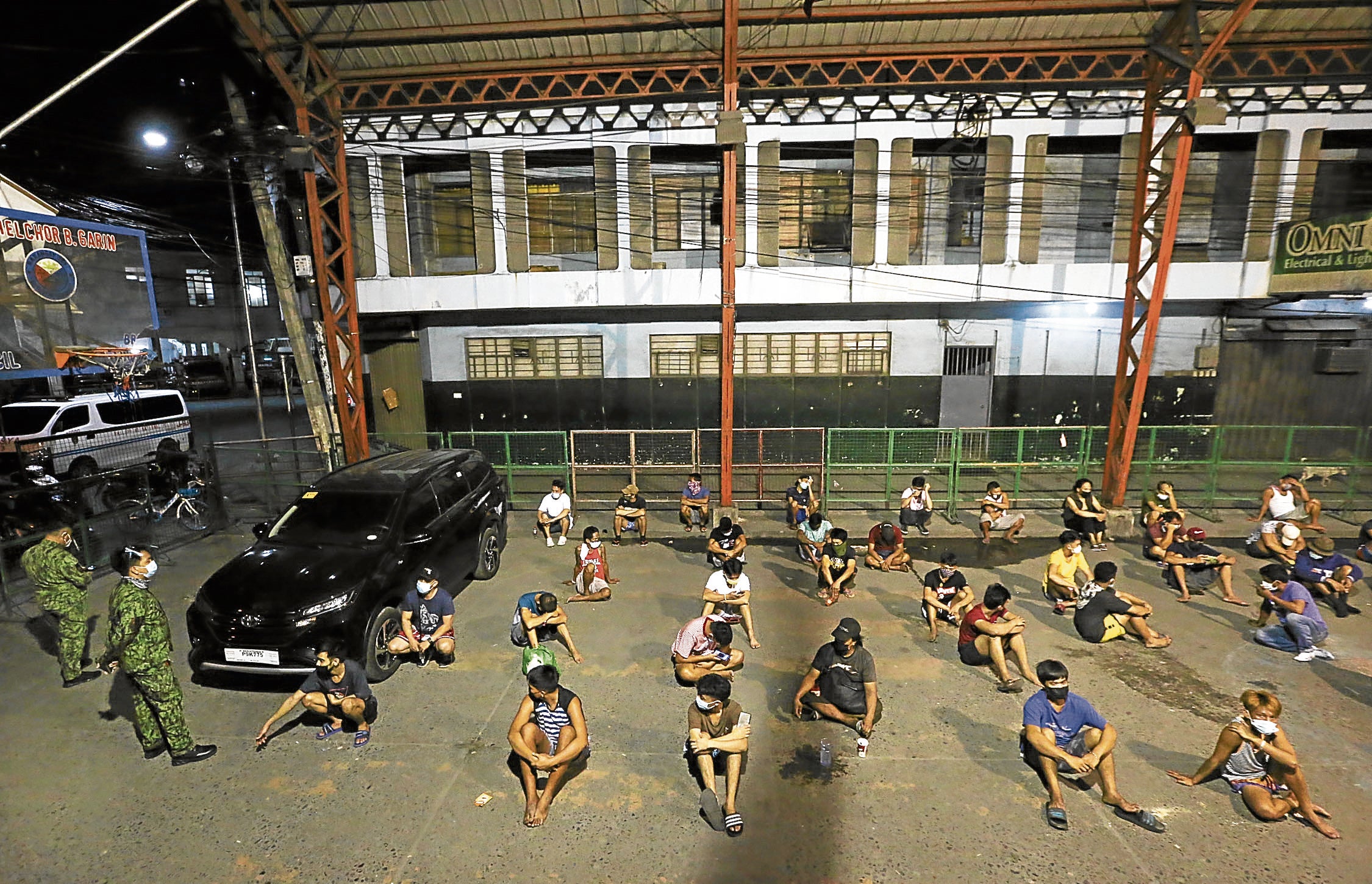 (FILE) Curfew breakers at a covered court in Binondo, Manila, after being apprehended by the police —LYN RILLON

MANILA, Philippines — Curfew breakers should not be arrested, but rather only get warnings or be made to pay fines for their violations, Philippine National Police (PNP) spokesperson Ildebrandi Usana said Thursday.

Usana made the remark after the death of Darren Penaredondo, who was allegedly ordered by the police to perform 300 strenuous exercise routines after violating the curfew being enforced in connection with the enhanced community quarantine (ECQ) in Cavite province.

The PNP spokesperson said that as a form of punishment, physical activities “are not being considered,” adding that ordinances from local government units (LGUs) should be in place as the basis of punishment for curfew breakers.

“From our end, in so far as the implementation of ECQ is concerned, we are only requiring police officers, those who are conducting checkpoints, to just simply warn, and if there are ordinances that require these violators to pay fines then they will be fined and then, maybe some seminars along the way,” Usana said in an interview with ABS-CBN News Channel.

“But for them to be arrested, the chief PNP himself already instructed our police officers not to do so because that would be tantamount to being counterproductive to addressing the concerns of these violators,” he added.

Usana said there is a pre-deployment briefing for the police officers “to understand the intricacies of enforcing whatever ordinances are in place in their constituencies.”

But how does the PNP ensure there is no police abuse even as policies and ordinances are in place? Usana said: “That’s the reason the chief PNP himself, based on the instruction of the President as well, that there must be no arrests to be made except of course on certain crime-related operations.”

“Last year we learned our lessons. We have had enough of the controversies that involved a number of our police officers and this year the chief PNP wanted that arrests should be out of the question,” Usana said.

“There must only be either warning or fines to be imposed, depending on the LGU requirement… There must be no requirement on staying put for a number of hours because that is also tantamount to putting into custody that person,” he added.

The police chief of General Trias City in Cavite province and two other policemen were  sacked over Penaredondo’s death after two others arrested for curfew violations submitted sworn statements supporting the narrative that curfew violators were being subjected to physical punishment.

Usana said the incident is now being investigated.