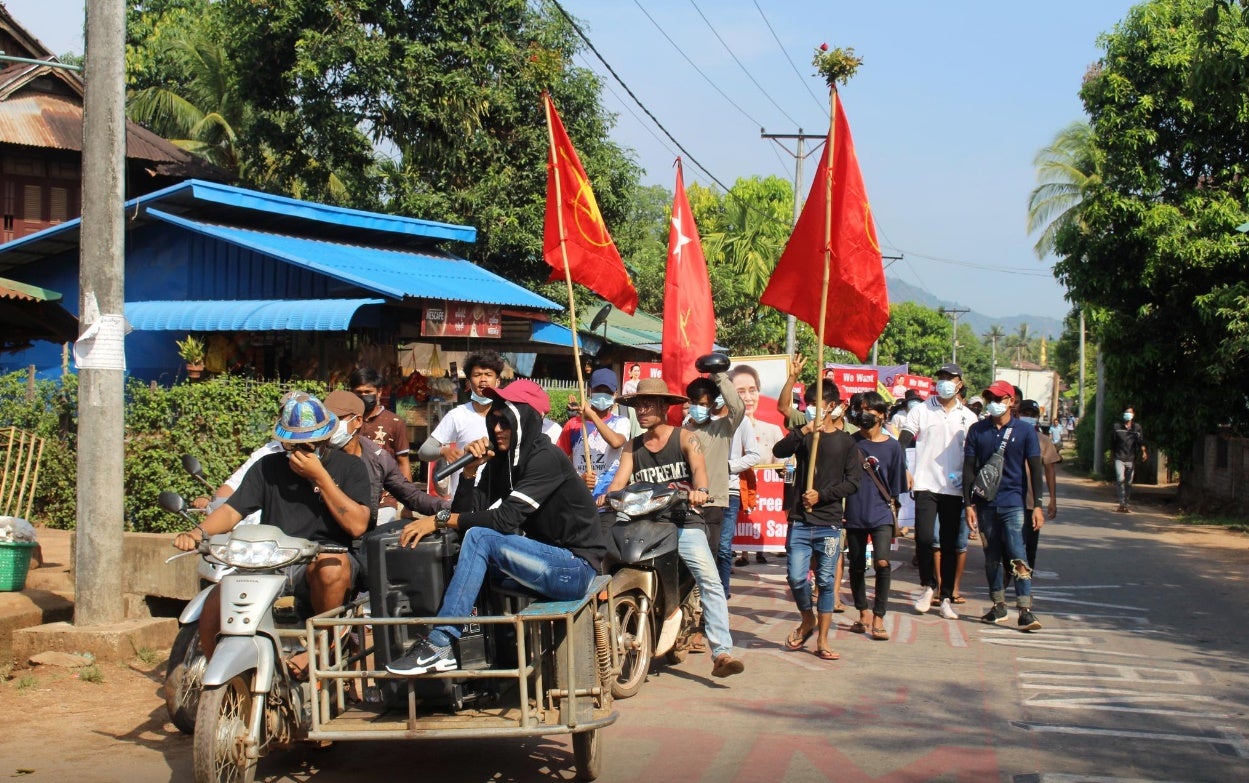 Villagers attend a protest against the military coup, in Launglon township, Myanmar April 4, 2021 in this picture obtained from social media. Dawei Watch/via REUTERS

Myanmar troops fired at anti-coup protesters on Wednesday, killing at least seven people and wounding several, media said, as a Chinese-owned factory was set on fire in the commercial capital Yangon and activists burned the Chinese flag.

More than 580 people have been killed, according to an activist group, in the turmoil in Myanmar since a Feb. 1 coup that ended a brief period of civilian-led democracy. Nationwide protests and strikes have persisted since then despite the military’s use of lethal force to quell the opposition.

Security forces opened fire on Wednesday on protesters in  the northwestern town of Kale as they demanded the restoration of Aung San Suu Kyi’s civilian government, a resident told Reuters.

The Kale resident said the information was provided to him by witnesses, who took pictures of five bodies.

Reuters could not independently verify the toll.

Two protesters were killed in the town of Bago near Yangon, the Myanmar Now news outlet said.

A fire broke out in the Chinese-owned JOC Garment Factory in Yangon on Wednesday, news reports and the Fire Department said. There were no reports of casualties and no details on the extent of damage.

In another Yangon neighborhood, activists set fire to the Chinese flag, according to pictures posted on Facebook.

China is viewed as being supportive of the military junta and last month there were arson attacks against 32 Chinese-invested factories in Yangon.

Senior General Min Aung Hlaing, the head of the junta, said in a statement published on Wednesday that the civil disobedience movement or CDM had halted the working of hospitals, schools, roads, offices and factories.

“Although protests are staged in neighboring countries and the international community, they do not destroy businesses,” he said. “CDM is an activity to destroy the country.”

According to the Association for Political Prisoners (AAPP) advocacy group, 581 people, including dozens of children, have been shot dead by troops and police in almost daily unrest since the coup, and security forces have arrested close to 3,500 people, with 2,750 still detained.

The mostly youth-led anti-coup movement’s ability to organize campaigns and share information via social media and instant messaging has been severely hamstrung by curbs on broadband wireless internet and mobile data services.

Fixed-line services, which few in Myanmar have access to, are available.

“Myanmar has been subject to a stepwise collapse into the information abyss since February,” Alp Toker, founder of internet blockage observatory NetBlocks told Reuters.

“Communications are now severely limited and available only to the few.”

With print media also halted, protesters have sought workarounds to get their message across, producing their own A4-sized daily news pamphlets that are shared digitally and printed for distribution among the public.

Arrest warrants have been issued for hundreds of people, with the junta this week going after scores of influencers, entertainers, artists and musicians.

The country’s most famous comedian, Zarganar, was arrested on Tuesday, media reported.

Indonesia is among several Southeast Asian countries leading a push for high-level talks on Myanmar.

Western countries including the United States, Britain and Australia have imposed or tightened sanctions on the generals and the military’s huge network of business monopolies in response to the coup, detentions and use of lethal force against demonstrators.

Russia, which has shown support for Myanmar’s ruling military council, on Tuesday said the West risked triggering civil war by imposing sanctions on the junta.

Fitch Solutions said in a report issued on Wednesday that targeted Western sanctions alone were unlikely to succeed in restoring democracy. It predicted in the medium-term a violent revolution pitting the military against an armed opposition comprised of members of the anti-coup movement and ethnic militias.

Some ethnic minority forces, which control large swathes of border regions, have said they can not stand by as the junta kills people and have already engaged the military in skirmishes.

Fitch said Myanmar was heading towards being a failed state.

“The escalating violence on civilians and ethnic militias show that the Tatmadaw (military) is increasingly losing control of the country,” it said, adding that the vast majority of people backed Suu Kyi’s ousted government.